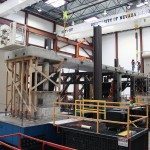 Construction on the University of Nevada, Reno’s new Earthquake Engineering Laboratory is complete and the first large-scale, multi-shake-table experiment features a new higher seismic-performing bridge design of pre-cast concrete columns and beams. Members of the media are invited to the University of Nevada, Reno’s world-renowned earthquake engineering facility on July 15 to view the final dynamic experiments in the research project.

The 52-ton, 70-foot-long concrete bridge was designed and the components were pre-cast at the University of Washington in Seattle, and then built atop three 14- by 14-foot, 50-ton-capacity hydraulically driven shake tables at the University of Nevada, Reno. It will be shaken in a series of simulated earthquakes, culminating in the large ground motions simulating the deadly and damaging 1995 magnitude 6.9 earthquake in Kobe, Japan.

WHAT: Dynamic testing of a large-scale concrete bridge built to a new engineering design that aims to speed construction and improve earthquake resistance. In the testing, the large-scale bridge model will be shaken with two horizontal motions at the same time to simulate the conditions found in real earthquakes.

MEDIA PARKING: Between the two engineering buildings to the right of the ramp.

MORE INFO ON THE LABORATORY: The University’s new Earthquake Engineering Laboratory combined with the Large-Scale Structures Laboratory comprise the biggest, most versatile large-scale structures, earthquake/seismic engineering facility in the United States, according to National Institute of Standards and Technology, and possibly the largest University-based facility of its kind in the world.

The $19 million expansion project, funded with $12.2 million by the U.S. Department of Commerce’s National Institute of Standards and Technology, funds from the Department of Energy, as well as University and donor funds, allows a broader range of experiments and there is additional space to add a fifth large shake table.

Time-lapse and photo gallery of construction of the new laboratory: http://imedia.unr.edu/ShakerTables/.

MORE INFO ON THE EXPERIMENT: Researchers have developed a new design for the framework of columns and beams that support bridges, called “bents” that is intended to improve performance. The improvements come in the form of better resistance to, and less damage from, earthquakes, and through faster construction on-site. The faster construction is achieved by pre-fabricating the columns and beams off site, after which they are shipped to site, where they are erected and connected quickly.

Up until now, the great majority of bridge bents have been made using concrete that is cast in place, but that approach means time is needed for the concrete to gain strength before the next piece can be added. By pre-fabricating the pieces in advance, time can be cut out of the on-site schedule, thereby reducing the need for lengthy construction on site.

For more technical information about the experiment, see the news release posted at the NEES website: https://nees.org/announcements/new-bridge-design-improves-earthquake-resistance-reduces-damage-and-speeds-construction.

Time-lapse video of bridge construction: The bridge components were designed and built at the University of Washington and transported to the University of Nevada, Reno where faculty, students and staff constructed the pre-fab parts on the three 50-ton capacity, 14- by 14-foot hydraulically driven tables. Link: http://youtu.be/MjDcEA4f40M.