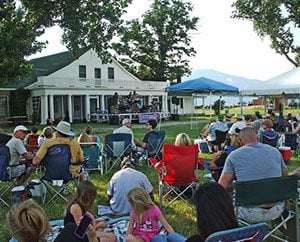 Sarah Royce was a leading female voice of the Overland Trail during the crucial year of 1849 and her book, ‘Frontier Lady,” is a classic of American women’s literature. Born in England in 1819, her family immigrated to the United States when she was six weeks of age. Raised in New York, she and her husband joined the first wave of 49’ers following the discovery of gold in California.

Dr. Dwyer’s appearance is a Humanities on the Road event sponsored by Nevada Humanities, Nevada’s nonprofit council affiliate of the National Endowment for the Humanities. The presentation is part of the park’s Ferris Family Speaker Series, sponsored by Bently Enterprises, SoaringNV, Douglas County, and the Frances C. and William P. Smallwood Foundation.

Royce’s descriptions of traveling through the desert in contemporary Nevada are unmatched in conveying the pitfalls of life on the trail. The mother of four children, including a son who would grow up to become the renowned Harvard philosopher Josiah Royce, Sarah founded church congregations and schools, notably in Grass Valley, California. She has become representative of the female role in shaping the culture of the American west.

Doris Dwyer has taught history and humanities at Western Nevada College in Fallon since 1980. In addition to Royce, she has portrayed Donner Party survivor Margaret Breen, contraceptive pioneer Margaret Sanger, Life photographer Margaret Bourke-White, evangelist Aimee Semple McPherson, Puritan dissenter Anne Hutchinson, and environmentalist Rachel Carson. Dwyer has performed hundreds of Chautauqua portrayals around the country, and is a Governor’s appointee to the Nevada Board of Museums and History, as well as a past recipient of the Governor’s Humanities Award and the Nevada Regents’ Teaching Award.

This is a free outdoor event. The park is located at 1450 Hwy 88, just north of the Carson Valley Animal Hospital. Visitors can bring a lawn chair or use one of the park’s chairs. For more information, visit dangberghomeranch.org or call 775-783-9417.

Other speakers in this year’s series include a group of local artisans demonstrating techniques and equipment for fiber arts on July 26. Former Nevada state treasurer Patty Cafferata and her daughter Elisa talk about Patty’s mother Barbara Vucanovich on August 2. Kim Copel presents a Chautauqua of stagecoach driver Charlie Parkhurst on August 23, and Dr. Anita Watson portrays Virginia City pioneer Mary McNair Mathews in a Chautauqua on September 6. Historian Ronald James discusses his book on Virginia City on September 27. Patty Cafferata returns on October 11 for a discussion of her book on Christmas in Nevada.