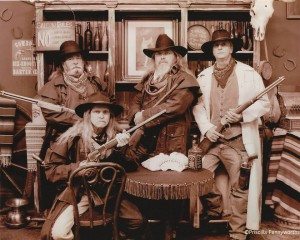 The Bootleggers band will headline a concert opened by another local group, Ten Dollar Pony, at the Dangberg Home Ranch Historic Park on Sunday, July 13, at 5 p.m.

Leading off at 5 p.m. is Ten Dollar Pony, a group whose musical style varies, with a little bit of folk rock, country rock, blues, and Latin. Ten Dollar Pony is the duo of Larry Nair on vocals, guitar, dobro, banjitar, mandolin, and Liza Beth Oliveto on vocals, guitar, and mandolin. They were featured in last fall’s Hermitfest, and also at Smith Valley’s exclusive Burning Girl Festival. Over the past three years their music has begun reaching a wider audience, having performed in Colorado, Minnesota, North Carolina, California, Vermont, and all over Northern Nevada.

The Carson Valley Lions Club will be selling burgers (including veggie burgers), hot dogs, popcorn and and ice cold beverages. Good beer and wine will be available for purchase from the Friends of Dangberg Home Ranch.

Ten Dollar Pony opens at 5 p.m., with Bootleggers performing from 6 p.m. to 7:30 p.m. Tickets are $10/person and are available in person at Battle Born Wine or Joyce’s Fine Jewelry, both with stores in Gardnerville, or at dangberg.eventbrite.com. Tickets, if available, will be sold at the gate, which opens at 4 p.m. Children 16 and younger are free and do not need a ticket.

Pets are prohibited, with the exception of certified service.

This concert is organized by the Friends of Dangberg Home Ranch, a 501(c)(3) non-profit. Thank you for your support of the Friends’ effort to care for the park. Information on contributing support to this effort is at dangberghomeranch.org. Questions: [email protected]