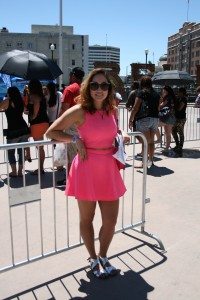 The American Idol Bus Tour made its way to downtown Reno on July 12, attracting hundreds of aspiring musicians.

“Believe,” the Burning Man art sculpture, was in the background while members of the Reno community took the opportunity to audition for American Idol.

Senior supervising producer Patrick Lynn said these are the easier rounds where anybody can try out; it’s a scaled down version from the televised auditions.

“We wanted to go to cities we usually wouldn’t go to,” Lynn said.

The American Idol Bus brought participants and fans of the show from all around the Reno-Tahoe community.

“We’ve watched American Idol from the beginning. Carried Underwood is famous because of us. We voted for her for hours,” said Reno residents Phyllis Nelson and Carla Vestbie.

Some participants waited in line to audition from the initial arrival of the bus at 8 am, with a variety of reasons that brought them out. 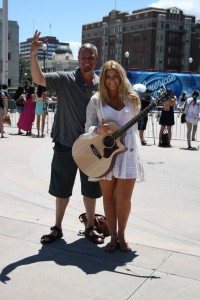 16- year-old Selima Pousima said she was taking advantage of an opportunity, because music to her is another language she likes to speak.

“There was a handful of contestants that made it through, I heard a lot of cheers. It’s tough to say, we usually let everyone audition until we get through everyone,” American Idol spokesperson Allison Grandi said.

One of the few lucky contestants was 17-year-old Claire Wright, from Auburn, Calif., who says one of her goals is to make a name for herself.

Wright and other lucky contestants will make their way to the next round in Kansas City.