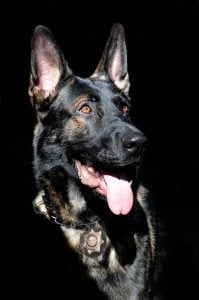 RENO POLICE DEPARTMENT NEWS RELEASE – On May 25, 2014 Reno Police Service Canine Johnny passed away following emergency surgery to clear and intestinal blockage. Johnny was 5 years old, and was the loyal partner of Reno Police Canine Handler Dan Knox.  Johnny served the City of Reno for the last 3 years. Johnny and Officer Knox never hesitated to assist any of their local, state or federal law enforcement partners and played an integral part in many important arrests in our region.  Johnny served his community faithfully never wanting anything more than his toy and praise from his best friend and partner, Officer Knox.  Johnny will surely be missed by all who had the pleasure of working with him.