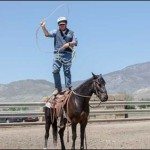 Carson City, Nev. – Approximately 200 people attended the second of three annual saddle-trained horse adoption events held at the Northern Nevada Correctional Center (NNCC) in Carson City on May 31. The event was hosted by the Bureau of Land Management (BLM) and the Nevada Department of Corrections.

Following a spirited competitive bid adoption, all of the 16 horses offered were adopted and as well as one burro. Bids started at $150 and the event’s top bid of $2,800 went for a four-year-old chestnut gelding named “Sunset.” The average bidding price for each horse was $1,105 and the total for all the animals was $18,800. The horses were gathered from herd management areas on public lands in Nevada, California and Utah and were saddle-trained for four months by inmate trainers in the NNCC program.

The successful bidders officially adopted their new horse or burro, and must show diligent care of each animal for a year before they can apply to the BLM to receive a title of ownership. Since 1973, the BLM has placed more than 230,000 horses and burros into private ownership through the adoption program.

The next saddle-trained horse adoption and competitive auction event is the Wild Horse and Burro Expo held at the Douglas County Fairgrounds in Minden, Nevada on Saturday, August 2, 2014.

More information about these special adoption events is available at: http://www.blm.gov/nv/st/en/fo/carson_city_field/blm_programs/wild_horse_and_burro.html