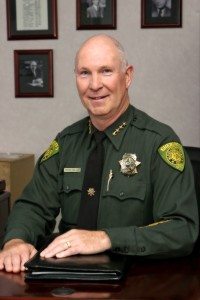 WASHOE COUNTY SHERIFF’S OFFICE NEWS RELEASE – The Washoe County Sheriff’s Office has sorrowfully announced the recent passing of former Washoe County Sheriff Dennis Balaam. Sheriff Balaam, age 63, passed away on May 6, due to an ongoing medical condition. The Sheriff was at home with members of his family at the time of his passing.

“It is with great sorrow that I must share with you information about the passing of a fellow Sheriff, respected colleague and good friend, Sheriff Dennis Balaam,” Sheriff Michael Haley stated. “There is much I can say about the many contributions he made to benefit our Office as well as the community as a whole during his tenure as Sheriff. We will all miss his leadership, wisdom, and warm and ready smile. Together, the Sheriff’s Office family will mourn his passing, celebrate his life and honor his legacy.”

Sheriff Dennis Balaam began his career with the Washoe County Sheriff’s Office in 1971 as a Reserve Deputy. In 2000, he became the 23rd Sheriff of Washoe County, the first Sheriff in 64 years to come up through the ranks to assume command of the agency. His many accomplishments included bringing the Amber Alert System to northern Nevada, acquisition of an armored SWAT vehicle to facilitate the protection and rescue of civilian and public safety personnel, improvements to the Civil Protective Custody/Intake area of the Detention facility and expansion of the Sheriff’s Office inmate work programs.

Sheriff Balaam retired from the Sheriff’s Office in January 2007 after 35-years of service to the community.

Sheriff Balaam was always an active member of the community, supporting a variety of charities and public service organizations. In 2000, he founded the Washoe County Honorary Deputy Sheriff’s Association, a non-profit organization through which members of the community and local businesses support the mission of the Sheriff’s Office along with a number of worthy causes such as the annual “Shop with the Sheriff” event.

Information regarding services for Sheriff Dennis Balaam will be announced as it becomes available.