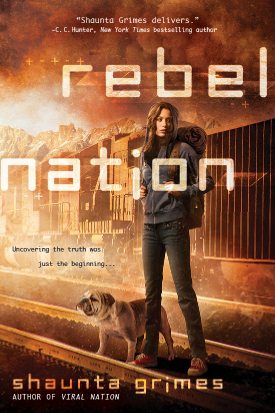 What: Local author Shaunta Grimes will give a reading and sign her latest novel Rebel Nation (Berkley Trade), the second book in her young adult series Viral Nation.

Rebel Nation by Shaunta Grimes: Sixteen years ago, a plague wiped out nearly all of humanity. The Company’s vaccine stopped the virus’s spread, but society was irrevocably changed. Those remaining live behind impenetrable city walls, taking daily doses of virus suppressant and relying on The Company for continued protection. They don’t realize that everything they’ve been told is a lie…

Clover Donovan didn’t set out to start a revolution—quiet, autistic, and brilliant, she’s always followed the rules. But that was before they forced her into service for the Time Mariners. Before they condemned her brother to death, compelling him to flee the city to survive. Before she discovered terrifying secrets about The Company.

Clover and the Freaks, her ragtag resistance group, are doing their best to spread the rebellion and stay under The Company’s radar. But when their hideout is discovered, they are forced, once again, to run. Only this time, The Company has special plans for Clover, plans that could risk her life and stop the uprising in its tracks…

About the Author: Shaunta Grimes has worked as a substitute teacher, a newspaper reporter, a drug court counselor, and a vintage clothing seller. No matter which direction she strays, however, she always comes back to storytelling. She lives in Reno with her family, where she writes, teaches, and perpetually studies at the University of Nevada. Her first novel, Viral Nation, was released in July 2013.