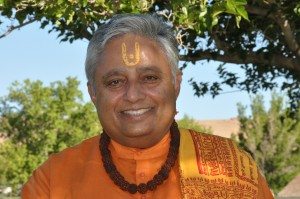 “Thus saith the Lord the King of Israel, and his redeemer the Lord of hosts; I am the first, and I am the last; and beside me there is no God.” -Isaiah 44:6

Zed, the president of Universal Society of Hinduism, recited the prayer from Rig-Veda, the oldest Hindu texts in continued use. This is the second time Zed has been invited to opening Congress, with his first historic Hindu prayer given in front of the Senate July 12, 2007.

Zed, wearing traditional Hindu attire, including a Hindu rosary and the traditional Hindu mark on his forehead, sprinkled drops of water from the Ganga River, considered holy by Hindus, around the podium before the prayer. He began the prayer with “Om,” the mystical sound used in Hindu to open and conclude Hindu worship.

House members, employees and the public were seen standing in prayer, bowing their heads during the invocation. The prayer was broadcast on C-SPAN. Zed was presented with a certificate of appreciation by House Speaker John Boehner.

Zed has read many opening prayers in various government entities, including county commissions and city councils around the U.S. Zed is also the coordinator for the Reno Gazette-Journal’s interfaith forum. His work has placed him on the forefront as interfaith leader. He has been awarded the World Interfaith Leader Award, and cities have declared October 25 as “Rajan Zed Day.”

Not everyone is open arms about Zed’s contributions to Interfaith Dialogue. According to Reuters, during the 2007 Senate Prayer, protesters interrupted his prayer calling it an abomination and proclaiming the name of Jesus Christ.

The protesters were arrested, but Barry Lynn, director of a religious watchdog group, said the protest was a reflection of the intolerance of the religious right, according to Reuters. Senator Harry Reid was responsible for inviting Zed.