I took Sunday morning to hike Hunter Creek Trail to the falls with my daughter. Just a couple of weeks ago, there was a fire in the area that grew bigger than I ever thought it would. That shut the trail down for a while. In fact, we were supposed to go last weekend, but the trail closure forced me to switch this trip with the trip up Mount Rose.

Being an easier hike up than Mount Rose, we traveled a bit lighter. She brought her hydration pack, which holds two liters and I brought my same pack as last time—this time with a full three liters alone with an extra 80 ounces. We brought some food for when we reached the falls and we brought jackets just in case. We’d never need the jackets. 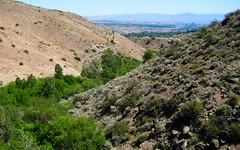 Looking Back to Reno: About a half mile up the trail you can look back and see Reno in the distance. Photo by Ryan Jerz.

The trailhead is pretty great. There is parking and a restroom Immediately, you pick up the creek and begin climbing. Right away you cross the creek. There are some rocks to step on at the main path, but a few feet to the left are a few boards to walk over if that suits you better. Then, it’s uphill.

The climb is not too steep and not too long. It just is. The creek is on the left the entire way up and you never stray too far from it—it’s just a few feet down the hill. You can hear it the whole time, too, as that steady uphill gives the creek plenty of falling to do.

About a mile and a half into the hike, I spotted the tail end of a bear moving through the trees at the creek. It was a good 50 yards below where we were, but an unmistakable movement. I pulled the camera out to try to get a shot of the bear when it reappeared, but it never did. That would have been a fun grab from the trip. The daughter saw a snake one time (I didn’t and am glad about that) and we both saw plenty of lizards up there. That was the extent of the wildlife. 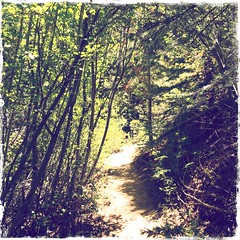 At about the two mile mark you begin to hike under much more tree cover. It’s a welcome addition to the landscape. There are some very short, but steeper hills to navigate as you wind your war through a meadow or two and around all the trees. You cross a small stream that feeds Hunter Creek in there as well. There is a stable little footbridge to get you across.

Finally, you’ll cross Hunter Creek itself. The bridge there is three logs side by side. Two of them are quite stead and the third, in the middle, is lower and feels a little wobbly. I Walking on the middle one and using the sides to hold on worked well for us, but it wasn’t ideal. It’s a short crossing—about 15 feet. A path about 50 feet long after that leads you to a covered clearing and the waterfall is to the right. To the left, the trail continues directly up the hill and beyond. 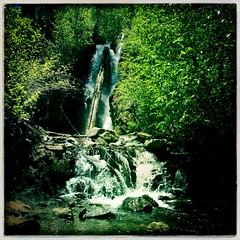 Hunter Falls: About a three mile hike up Hunter Creek Trail in Reno you come upon this waterfall. It’s a popular destination and a good one. Photo by Ryan Jerz.

The waterfall is pretty cool. It’s probably about 40-50 feet high and has a small pool at the bottom. There are some downed trees that allow you to sit and enjoy launch or whatever while you just watch it. You could easily explore around there. It’s even possible to climb to the top of the waterfall and continue on a short distance with the trail. A posted sign asked that you don’t climb up at this time, however.

We hung around for about 20 minutes and ate, then headed back down. After about a 90 minute climb up, we made it back in just over an hour. No bear sightings on the way down, unfortunately, but Walden’s is pretty close by and they serve beer and Italian Sodas. We also saw quite a few people making their way up the hill. All in all, I would say we saw between 60-80 people total in out time there, so it’s a pretty popular spot on a Sunday, but definitely worth a quick morning hike.

Below is the elevation profile, and here is the Strava data.