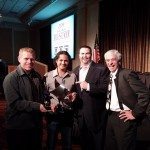 Dragonfly Energy, a graduate entrepreneurship team from the University of Nevada, Reno, won first place and $30,000 in the graduate-level competition of the annual Donald W. Reynolds Tri-State Governor’s Cup held in Las Vegas, May 23.

The Tri-State Governor’s Cup is a collegiate business plan competition where graduate and undergraduate business students compete separately for top recognition and cash prizes. Students pitch business plans from the three states of Nevada, Arkansas and Oklahoma. The University’s winning team is comprised of EMBA students Denis Pharis and Sean Nichols along with mechanical engineering doctoral student Justin Ferranto and faculty mentor Matt Westfield. The team also won the 90-second elevator pitch and was awarded an additional $2,000.
Dragonfly Energy is a Reno-based technology company that focuses on the energy efficiency of lithium-ion batteries. Their business plan includes a process to streamline the manufacturing of these batteries in order to reduce the manufacturing costs by 50 percent. Their plan earned them top recognition at the graduate level making them the first team from Nevada to win at the tri-state competition.
“It was an honor and a privilege to represent the state of Nevada,” team member Nichols said. “It was a once in a lifetime opportunity and it added a lot of value to my college experience.”
The team was also a finalist in the University’s Sontag Entrepreneurship Competition in March and came in second in the Nevada’s Governor’s Cup Graduate School competition in April, qualifying the team to move on to the tri-state competition.
“Tri-State was a great experience,” team leader Pharis said. “Not just because we won, but because we learned a great deal. We participated in the Sontag competition, the Nevada Governor’s Cup, and the Tri-State. This allowed us to practice presenting our plan and pitching our ideas in front of many judges. We received fantastic feedback each time, and improved immensely.”
The competition is funded largely in part by the Donald W. Reynolds Foundation. The foundation honors the memory of Donald Worthington Reynolds who was instrumental in the funding and development of the Reynolds School of Journalism at the University. During his lifetime, Reynolds focused his philanthropy in the states of Nevada, Oklahoma and Arkansas. The foundation continues Reynolds’ legacy by promoting entrepreneurship through the competition. A complete list of winners of the D.W. Reynolds Tri-State Governor’s Cup can be found at their website.