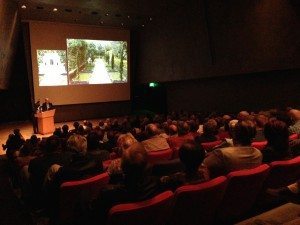 On Friday, May 30, 2014, the theater at the Nevada Museum of Art, was filled with arts enthusiasts awaiting the Doris Duke: Shangri La premiere talk with Thomas Mellings and Donald Albrecht. Image: Samantha Wang.

On Friday, May 30, 2014, the theater at the Nevada Museum of Art was filled with arts enthusiasts awaiting the Doris Duke: Shangri La premiere talk with Thomas Mellings and Donald Albrecht.

Mellings and Albrecht, both curators with the Museum of the City of New York, have collaborated on a number of projects for many years, including the Shangri La traveling exhibition at the Nevada Museum of Art.

The co-curators discussed topics ranging from Doris Duke’s lifetime, her extensive art collection and her ongoing effort to promote the understanding and appreciation for the Islamic world.

At the age of 13, Duke inherited over $100 million, due to her father’s abrupt death.

“The press dubbed Doris Duke as the world’s richest girl, which made her a celebrity, almost a la the Kardashians,” Mellings said.

In order to escape the media, she built Shangri La after traveling around the world for her honeymoon with her husband, James Cromwell. Her beloved home was completed in 1935 and was situated on a five-acre site in Honolulu overlooking the Pacific Ocean.

According to Albrecht, Shangri La was Duke’s most personal home because she shaped it into her own image. 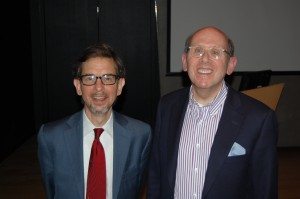 Mellings and Albrecht brought the audiences through a visual journey of the contents of the Shangri La home.

In the 1960s, the house turned into a museum, and it became a study center for scholars of art and culture in the Islamic world.

The Doris Duke Foundation for Islamic Art maintains Shangri La in Honolulu, with over 3,500 objects collected by Duke.

The exhibit runs through August 31, 2014 at the Nevada Museum of Art.