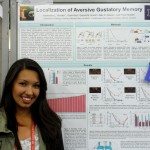 After the first buzz, the pesky housefly is doomed for a swat. But the housefly’s close cousin, the Drosophila fruit fly, is more useful alive for study and experimentation. In fact, University of Nevada, Reno undergraduate Kurtresha Worden’s research on fruit flies received first place at the 55th Annual Drosophila Research Conference’s Undergraduate Poster Competition. Her award-winning poster comprised over a year’s worth of research focused on mapping the neural circuitry regulating taste memory.

“Kurtresha’s progress has been amazing,” said Alex Keene, an assistant professor at the University’s biology department and co-mentor for Worden. “She works long hours in the lab, despite a full course load, and her work on memory will have a broad impact in the research community.  She is as talented and motivated as any undergraduate I have ever worked with.”
The five-day conference in San Diego, Calif., included talks and posters from students, postdocs and faculty around the world. More than 1,500 researchers attended the conference, which is the largest meeting of fruit fly researchers in the world. Worden’s poster received grand prize, earning Worden a monetary award of $500, free literature and discounted prices on publication fees.  She was also honored during the closing ceremony of the conference.
“I was pleasantly surprised,” Worden said. “Attending the meeting provided an amazing opportunity to interact with some of the world’s leading scientists. I received some valuable feedback that will help as we move to publish. Receiving this award is icing on the cake.”
Worden’s research focused on discovering which brain neurons of a fruit fly were associated with developing taste memory. To do this, Worden provided fruit flies with the taste of sugar at the same time as she offered a bitter substance. Flies quickly learn to stop responding to sugar. Worden then used genetic tools to manipulate the function of individual neurons within the fly brain to determine the neurons required for memory formation.
This work is a collaboration with Dr. Gerald Rubin, director of Janelia Farms and vice president of the Howard Hughes Medical Institute, and his postdoctoral fellow Dr. Yoshi Aso.
“The opportunity to collaborate with Gerry and Yoshi has been amazing,” said Pavel Masek, assistant research professor in the University’s College of Science and Worden’s second mentor.  “They have been extremely supportive and provided us the tools to ask questions in flies that could not be asked in any other model system.”
Worden said she hopes that her results will assist in associative memory research studies in respect to humans. By continuing to use simpler organisms like the fruit fly, scientists can advance the research, limit variables and discover the most viable paths before moving to complicated organisms like humans.
“If we gain better knowledge of how the processes underlying learning and memory formation work in flies, it might give us insight into how to treat memory-related disorders in humans such as Alzheimer’s disease” Worden said.
Worden will continue her research over the summer as a visiting student in the Neurobiology Department at Harvard Medical School and will be applying to doctoral programs in the fall.
“My experience at the University has been spectacular,” Worden said. “I’d like to attend a top-tier graduate school and find a lab using genetics to address questions related to brain disease.  Hopefully I can find a research environment that is as supportive as the one here at the University of Nevada, Reno.”
Worden is from Roseville, California. She hopes to attend the Drosophila research conference next year. The Drosophila Research Conference takes place annually to feature leading research of the Drosophila fruit fly. The conference is organized by the Genetics Society of America, a professional research organization with nearly 5,000 members dedicated to research genetics.