By ThisIsReno Published: May 6, 2014Last Updated on May 22, 2017
The custom-made Pigeon Head Brewery sign looking from the bar to the parking lot. 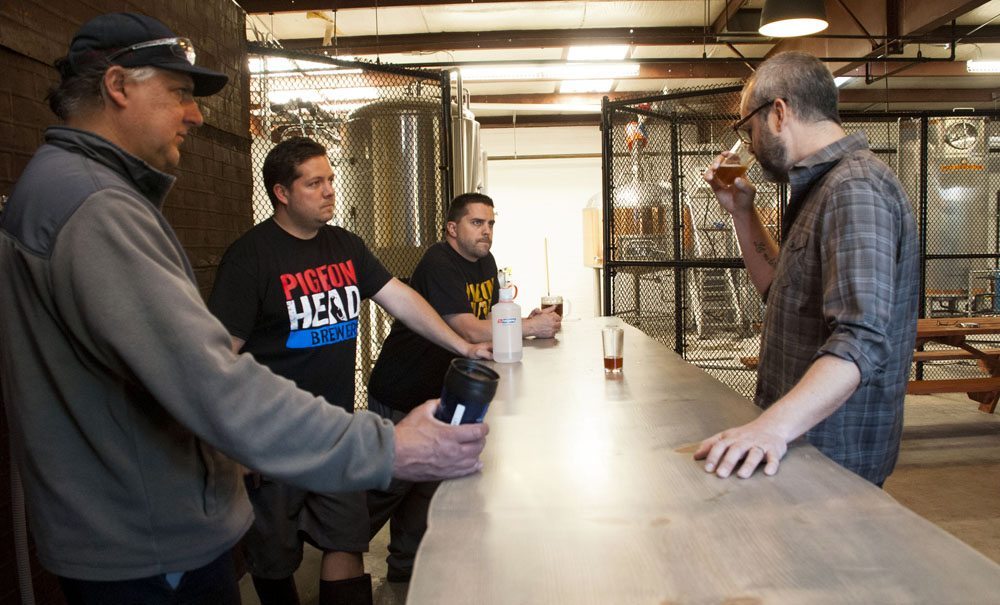 A new Reno brewery on Fifth Street will soft launch its first few beers, including a German keller brau, a blonde ale and rye pale ale, Friday, May 9, in preparation for a grand opening at the end of the month. Pigeon Head Brewery will eventually feature six taps of mostly lager beers and the occasional season ale.

Northern Nevada’s newest brewery emerges from the old SPCA building hidden under the Wells Ave. overpass on Fifth Street. Not just any brewery, a lager brewery run by a brewmaster with 25 years of experience who plans to break the trend of Belgian beers and IPAs in the northwest.

Eddie Silveira IV, “the brains behind Pigeon Head” and brewmaster Lance Jergensen met at the Reno Homebrewer about six years ago when Lance needed grain for his company, Rebel Malting. Eddie’s ranch in Yerington, Nev. can grow up to 15 acres of grain so they formed a partnership. Eddie decided not to grow any this year, though, so he can focus on the new brewery. Instead, Pigeon Head’s base grain will come from Churchill Vineyards.

Despite his 25 years of experience, Lance remains a quiet, humble brewer whose excitement and pride shows most when he talks about the lagers he wants to make. By the grand opening in late May, a Black Lager, Pilsener and India Pale Lager will join the tap list. Eventually, Lance plans to introduce Reno to some interesting European styles that don’t exist in the United States.

Lance also wants to bring a traditional Danish-style lager to Reno, something like Carlsberg, that’s made of 30-percent maize and 2-row barley. With most breweries making Belgian beers and IPAs, Lance plans to go the opposite direction and show everyone that it’s not taboo to put adjuncts into beer to make it taste better.

For more about Pigeon Head Brewery, see the complete story on DrinkableReno.com.

Opening: Friday, May 9. Grand opening end of May.