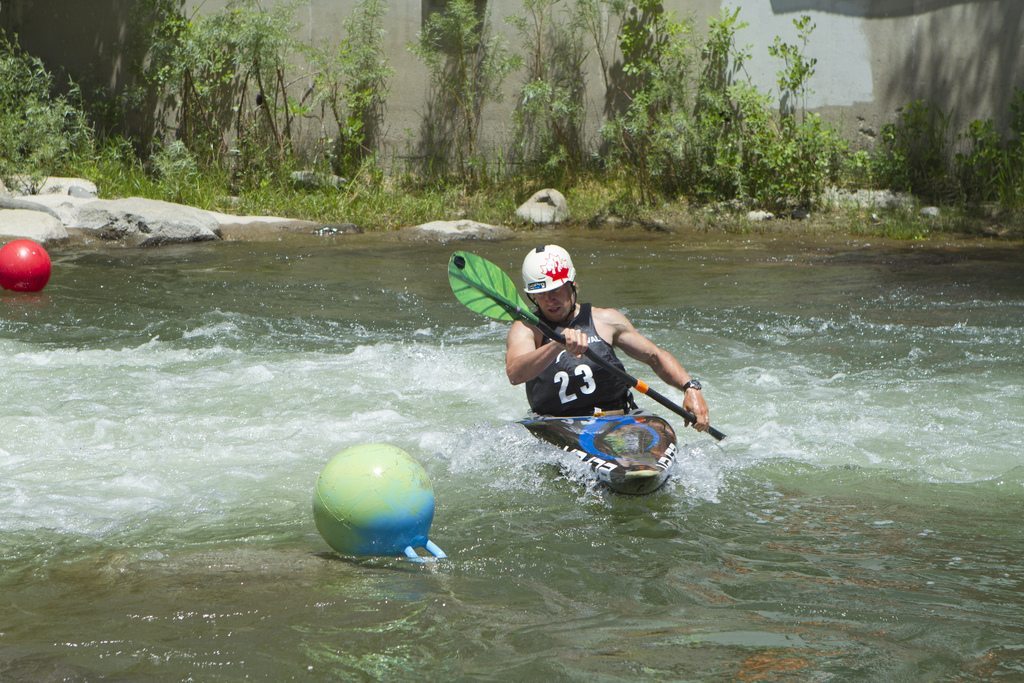 The world’s top kayakers return to Reno’s whitewater park for the 2014 Reno River Festival, May 10-11. This year’s event again brings national and international champions to Reno, as the River Festival presents one of the few urban whitewater paddling opportunities in the world. Tens of thousands of visitors are expected downtown for the event.

Presented by Nature’s Bakery, Saturday brings the men’s and women’s freestyle competitions which encourages boaters to complete as many complex tricks aspossible during the allotted one-minute time slot for a chance at advancing to the final round. Preliminary rounds start at 10 a.m. and continue throughout the day followed by Finals at 4:30 p.m. Awards will be handed out at 7 p.m. immediately following Old Dominion, the Festival’s music headliner.

Paddlers hit the water once again on Sunday for a day of speed, agility and endurance tests during the downriver SUP race, slalom, boatercross and tubercross competitions. Starting at 10 a.m., stand-up paddleboarders head west to Idlewild Park to put in, followed by a race downriver over rapids and treacherous rocks back to Wingfield Park. Paddlers must make it all the way to the pedestrian bridge at West Street Plaza for a chance at the top prize – while remaining on the board.

New this year is an event unique to Reno – tubercross. Professional kayakers will hop into good old-fashioned inner tubes and race down the Truckee four at a time. Tubercross makes its debut at 3 p.m. in the north channel.

Former Olympian, Eric Jackson, will send out a  team of Jackson Kayak members, consisting of former world champion and U.S. kayaking team members such as Devon Barker and Stephen Wright. Wright is known for his freestyle moves.

University of Nevada student Jason Craig, a former junior world champion in freestyle, and current Reno River Festival champion, also returns to the Festival, following a  recovery from a broken back. Craig will bout against Alex Vorhees, a world medalist in junior freestyle championships.

In the women’s division, current New Zealand national champion and former world freestyle medalist, Courtney Kerin comes to the Festival to compete against competitors including former world freestyle champion Emily Jackson. Sage Donnelly, a 13-year-old local who has come up on the Truckee, consistently holds her own against women twice her age.

All of this year’s kayakers will be competing for over $7,000 in cash and prizes with top champions taking home a golden cowboy hat trophy.

The Reno River Festival offers free clinics as well as an outdoor expo featuring some of the industry’s best vendors. And for those who are simply looking to enjoy everything that the Truckee River and downtown Reno have to offer, the Festival returns with activities such as yoga in the park each morning at 9 a.m. followed by an afternoon of live entertainment from Old Dominion, Jelly Bread, the Mark Sexton Band and Keyser Soze.

For more information on the 2014 Reno River Festival and a complete schedule of events including concerts and clinics, visit www.renoriverfestival.com.

A burger for everyone

Aaron Salazar: “I Did Not Jump From The Train” (Watch...

Savor and Sip While Supporting Truckee Tahoe School of Music