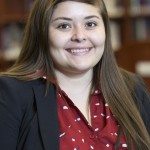 Fast-forward again, to April 15, when she learned in a surprise presentation by University of Nevada, Reno President Marc Johnson that she has been named a Truman Scholar, considered one of the country’s most prestigious undergraduate scholarships.
Padilla-Rodríguez’s string of impressive academic and community-service accomplishments led Glamour magazine to name her this month to their list of Top 10 College Women of 2014. The issue hit newsstands April 11, and Padilla-Rodríguez joins the other honorees in New York City for a series of workshops and social events hosted by Glamour April 17.
It’s not her first time on the national stage. During her freshman year at the University, Padilla-Rodríguez was chosen from thousands of submissions to compete with five finalists for the Dr Pepper Tuition Throw Competition after submitting a video explaining why she deserved to win college tuition. After much practice on her own plus throwing lessons with Wolf Pack quarterback Cody Fajardo, a fellow student in Padilla-Rodríguez’s theatre class, she hit the target with the most footballs in 30 seconds and won the nationally televised competition.
“I mentally embodied a six-foot tall football player to prepare myself for the biggest stage of my life,” she said after the competition.
The 2011 valedictorian from Canyon Springs High School in North Las Vegas is now a junior at the University majoring in history and philosophy of ethics, law, and politics, with a minor in ethnic/Latino studies. She plans to attend law school, become a federal judge and ultimately a Supreme Court Justice.
“Due to my upbringing and aspirations, I strongly believe federal judges should understand the needs of low-income and minority populations,” Padilla-Rodríguez said. “Like Supreme Court Justice Sotomayor, whose story has inspired me, I too welcome the chance to work on issues crucial to the community in which I was raised.”
As a student in the University’s Honors Program, Padilla-Rodríguez has been involved with service-learning projects. At a non-profit theatre in Reno’s Midtown district, Padilla-Rodríguez co-founded a youth theatre program called Spotlight: Academy for Young Actors. She also established a community outreach program through the Washoe County School District’s most at-risk schools, and taught the program in Costa Rican, Cuban and Mexican orphanages while studying abroad through the University Study Abroad Consortium.
“While homeless, school became a safe haven for me,” she said. “I became involved in afterschool theatre, a fictional world where I created characters onstage to avoid my real-life role as a homeless girl. I realized that my situation, and the plights of other Latinos, could be improved by onstage and academic success.”
“I am especially happy that I have been recognized for my work with the Spotlight Academy For Young Actors,” Padilla-Rodríguez said of the Glamour magazine distinction.
In early April 2014, Padilla-Rodríguez traveled to Phoenix, Ariz., to interview for the Truman Scholarship. The $30,000 Harry S. Truman Scholarship is awarded annually to approximately 60 U.S. college juniors who demonstrate leadership potential and a commitment to public service. Padilla-Rodríguez is the University’s fourth Truman Scholar.
Padilla-Rodríguez also was recently chosen to present her research project at the 18th Annual Posters on the Hill event in Washington, D.C., showcasing undergraduate research work. She will travel with her mentor, Emma Sepulveda, director of the University’s Latino Research Center, to present her poster and research project, “Significance of Comprehensive Immigration Reform for Undocumented Families of Latin American Descent in the U.S.”
“Ivon is the story of perseverance,” Sepulveda said. “She will put a goal in front of her and won’t let anything stop her until she reaches it. She is among some of the most focused, motivated, well-read and well-rounded students I have seen in my 30 years of teaching.”
Padilla-Rodríguez will continue her work with at-risk Latino youth this summer teaching improvisational theatre in Chile and she will work as an intern for Chilean congressman Joaquin Godoy. She is the first University student to have an internship with the Chilean Congress.