A team of students from Washoe County School District’s Academy of Arts, Careers and Technology returned home victorious after competing in the first annual NASA Human Exploration Rover Challenge, held April 11-12, 2014, at the U.S. Space & Rocket Center in Huntsville, Ala. The Reno students’ team and their sophisticated rover vehicle won top honors, finishing first among nearly 100 high school and university teams from around the world.

Supported in part by Nevada NASA Space Grant Consortium (NVSGC), the Reno rover team is a partnership between the school district’s Academy of Arts, Careers and Technology (AACT), and Fleischmann Planetarium at the University of Nevada, Reno. University faculty worked with teachers and administrators from AACT to develop the program, which engages students in science, technology, engineering and math (STEM) through hands-on experience, trains teachers and College of Education students in career and technical education, and studies the impact on student attitudes and academic performance.
Advised by their teachers, nearly 40 students from each of the academies at AACT worked on components of the rover in class; and nearly 20 students worked additional extracurricular hours to fabricate the high-tech vehicle, advised by AACT teachers and University faculty. A team of six students was selected through an application process to travel to Huntsville for the 2014 NASA Rover Challenge. 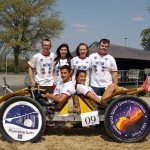 Reno’s AACT/UNR team also received the Neil Armstrong Best Design Award for the second year in a row, given for the best technical approach to engineering a vehicle for navigating the extraterrestrial terrain of the course. The award honors the memory of astronaut Armstrong, the first man on the moon during the historic 1969 Apollo 11 mission.
“The students are elated over their rover wins, which reinforce months and years of work on a project that also exposes them to future opportunities in the STEM disciplines,” said Dan Ruby, associate director of Fleischmann Planetarium and team advisor. “It’s also great our state had two teams in the competition’s top 10, with our neighbor team from Virginia City High School coming in ninth.”
This year’s first annual NASA Human Exploration Rover Challenge is an evolution of NASA’s Great Moonbuggy Race, held for 20 years at the U.S. Space & Rocket Center. The new focus of the program is a shift toward a research-and-development project. The event challenges students to design, build and race light-weight, human-powered rovers to address unique conditions of space exploration. The major technology challenge for this year’s NASA event was to design airless wheels that could function on the surfaces of the Moon, Mars and beyond.
“Our AACT/UNR Rover Program was developed to engage students and teachers in STEM through hands-on experience and team design and fabrication of a vehicle to participate in the NASA challenge,” said Ruby, who helped develop the program in collaboration with Dana Ryan, director of career and technical education with the Washoe County School District. “This is the fourth year of our Reno program and 36 students from each of AACT’s academies worked on the rover in class through an integrated curriculum. Six students were chosen through an application process to travel to the U.S. Space & Rocket Center to compete in Huntsville.”
At the NASA event, nearly 100 rover teams from around the world raced on a course strewn with obstacles to simulate lunar terrain. Reno’s team completed the competition’s difficult half-mile course in three minutes and 37 seconds, including vehicle assembly. The AACT/UNR Rover Team is building on an award-winning four-year history of achievements in the NASA competitions, including a 2011 Rookie Award for fastest time by a new team and placing in the top 10 each year.
The Reno students received a $3,000 award for their first-place win, which will go toward funding their participation in next year’s Rover Challenge. The race-winning rover will also be on display at Fleischmann Planetarium on the University campus from June to August 2014, accompanied by an exhibit about the vehicle and the race experience.
“We’re excited about the recognition of these high school students’ achievements and we hope it’s not just an experience of a lifetime, but the first of many future successes in their careers in science, technology, engineering and math,” said Ruby.
For more about NASA’s Human Exploration Rover Challenge, visit www.nasa.gov/roverchallenge .
For information about the Nevada NASA Space Grant Consortium (NVSGC), visit www.nvspacegrant.org .
For more information about the planetarium and its involvement in the NASA program, call (775) 784-4812 or visit www.planetarium.unr.edu .
Fleischmann Planetarium is located north of Lawlor Events Center on North Virginia and 16th streets, on the University of Nevada, Reno campus, 1.5 miles north of the downtown Reno arch. Free permit parking is available in the West Stadium Parking Complex, level 3, just east of the Planetarium.

Built in 1963, the Fleischmann Planetarium on the University of Nevada, Reno campus was the first planetarium in the world to project fulldome movies, and one of the first of a handful of planetariums around the world to utilize the Spitz SciDome digital projector, a high-resolution, state-of-the-art immersive visualization tool. The planetarium’s uniquely shaped mid-century modern (some would say space-age!) building was designed by famed Reno architect Ray Hellmann and is listed on the National Register of Historic Buildings. For more than 50 years, Fleischmann Planetarium has been committed to partnerships and collaborations with other University departments and community organizations, and currently serves more than 40,000 visitors a year, including hundreds of school field trips that introduce students, K-12, to the wonders of the universe.

Founded in 1874 as Nevada’s land-grant university, the University of Nevada, Reno ranks in the top tier of best national universities. With nearly 19,000 students, the University is driven to contribute a culture of student success, world-improving research and outreach that enhances communities and business. Part of the Nevada System of Higher Education, the University has the system’s largest research program and is home to the state’s medical school. With outreach and education programs in all Nevada counties and home to one of the largest study-abroad consortiums, the University extends across the state and around the world. For more information, visit www.unr.edu and www.extendedstudies.unr.edu .