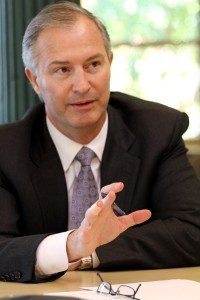 CARSON CITY — On behalf of its client, NPRI’s Center for Justice and Constitutional Litigation today filed a Non-Opposition welcoming the Nevada Legislature as a party in its lawsuit against the Governor’s Office of Economic Development, the State of Nevada and GOED Executive Director Steven Hill.

On March 24, the Nevada Legislature filed a motion to intervene in the case, and after filing a non-opposition in the First Judicial District Court, CJCL Director and Chief Legal Officer Joseph Becker released the following comments:

We welcome the Legislature as a defendant in our lawsuit, which seeks to uphold Nevada’s Constitution by stopping the government from picking winners and losers in the economy.

Voters, though, overwhelmingly rejected those proposals.

Article 8, Section 9, of the Nevada Constitution reads, “The State shall not donate or loan money, or its credit, subscribe to or be, interested in the Stock of any company, association, or corporation, except corporations formed for educational or charitable purposes.”

CJCL filed its lawsuit challenging the constitutionality of the Catalyst Fund on Feb. 19, 2014. CJCL is representing Michael Little, a clean-energy entrepreneur, whose competitor, SolarCity, has received a commitment from GOED to provide it with a $1.2 million taxpayer-funded subsidy.

“In addition to being unconstitutional, the Catalyst Fund is fundamentally unjust, because it makes a business owner subsidize his competition,” Becker continued. “Furthermore, history has shown that companies receiving government handouts — like Solyndra, Abound Solar, Fisker and ThromboVision — often fail, personally enriching the politically connected but wasting hundreds of millions of taxpayer dollars.”