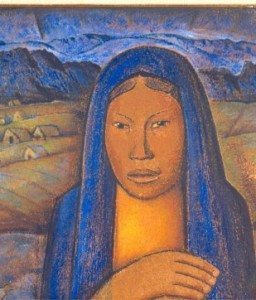 NEVADA MUSEUM OF ART NEWS RELEASE – One of many exciting Nevada Museum of Art events this May, the “Picturing Mexico: Alfredo Ramos Martínez” exhibition marks the first comprehensive examination of the artist’s work produced from 1929 to 1946. An artist of great significance, Ramos Martínez (1871–1946) developed his own distinctive contribution to modernism.

This exhibition explores Ramos Martínez’s work through four sections—Many Women, Religious Piety, Los Angeles Stories, and Forever Mexico—and how he produced an individual response to Mexico from Los Angeles. The study of Ramos Martínez’s work in Los Angeles provides a greater understanding of the myriad cultural contributions of artists living in the city during the first half of the twentieth century.

While many scholars have studied the influence of Rivera, Orozco, and Siqueiros in the United States, this exhibition breaks new ground by further developing research on the presence of other influential Mexican artists in Los Angeles. This exhibition also offers visitors an opportunity to understand the constant cultural exchange between the United States and Mexico in new ways.

The Nevada Museum of Art is a museum of ideas. The only accredited art museum in the state, it is a private, non-profit organization supported by the generosity of its membership as well as by sponsorships and grants. Through creative programming and scholarship, the Museum provides the opportunity for people to encounter, engage and enjoy a diversity of art experiences. The Museum is open Wednesday through Sunday, 10 am to 6 pm, late on Thursdays until 8 pm, and closed on Mondays, Tuesdays and national holidays. Admission is FREE for members, $10 General Admission, $8 Student / Senior, $1 children 6 to 12 years and free for children 5 and under. Annual Museum Membership starts at just $30.