Historian to sign and discuss new book about boxing in Nevada 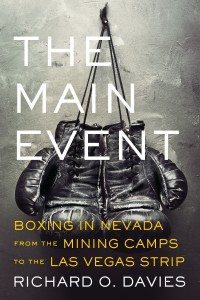 What: Historian Richard O. Davies will sign and discuss his new book, The Main Event: Boxing in Nevada from the Mining Camps to the Las Vegas Strip (University of Nevada Press, 2014).

About the Book:  As the twentieth century dawned, bare-knuckle prizefighting was changing into the popular sport of boxing, even as it was widely banned as immoral. In 1897 Nevada became the first state to legalize it, to stage the Corbett-Fitzsimmons world heavyweight championship in Carson City. It was boxing–before gambling, prostitution and easy divorce–that first got Nevada called “America’s Disgrace” and the “Sin State.” Reno hosted the Johnson-Jeffries “Fight of the Century” in 1910. Starting in the Rat Pack era, more than two hundred championship bouts were held in the arenas outside Vegas casinos; tourists and gamblers came to see and bet on fights with Ali, Foreman, Tyson and other legends of the ring. Davies shows that the history of boxing in Nevada is integral to the growth of the sport in America and that boxing’s popularity in Nevada grows out of the state’s maverick culture.

About the Author:  Richard O. Davies is distinguished professor of history, emeritus, at the University of Nevada, Reno. His most recent book is Rivals! The Ten Greatest American Sports Rivalries of the 20th Century; other works include Sports in American Life: A History and The Maverick Spirit: Building the New Nevada. In 2013 he was inducted into the Nevada Writers Hall of Fame.