By ThisIsReno April 28, 2014
Barbara F. Vucanovich: From Nevada to Congress, and Back Again 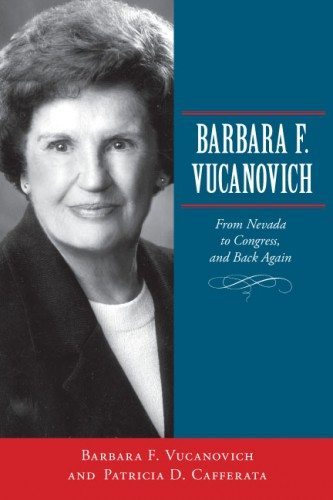 Barbara F. Vucanovich: From Nevada to Congress, and Back Again

What: A Tea at Tillie’s: A Conversation About the Life of Barbara F. Vucanovich

About the Event: A conversation about the life of Barbara F. Vucanovich with Patty Cafrerata (Barbara’s oldest daughter), Elisa Cafferata (Barbara’s first grand daughter) and the audience. Sam Shad will moderate the discussion. The gathering is to mark the release of the paperback edition of Barbara F. Vucanovich: From Nevada to Congress, and Back Again (University of Nevada Press), and to celebrate Barbara’s life in and out of politics.

Barbara F. Vucanovich: From Nevada to Congress, and Back Again

When Reno Republican Barbara F. Vucanovich was elected to Congress in 1982, she became the first Nevada woman ever elected to a federal office, and the first person to represent Nevada’s newly created Second Congressional District. Campaigning as a “tough grandmother,” she distinguished herself during her fourteen-year service in the U.S. House of Representatives by her indefatigable efforts on behalf of her state, her commitment to the conservative ideals of her party and the needs of her constituency, and her common sense approach to politics and her own life.

Encouraged by Laxalt to run for Nevada’s new congressional seat, she became a sixty-one-year-old first-time political candidate. Vucanovich’s lively accounts of campaigning and office-holding offer a rare insider’s view of the day-to-day realities of a political career — the excitement and exhaustion of hard-fought campaigns; the endless cross-country commutes to maintain contact with constituents; the inner workings of Congress as bills are written, debated, and voted on. Her profiles of other politicians, from Reno city leaders to Nevada state and national officeholders to her congressional colleagues to presidents of the United States, offer valuable insight into the personalities and politics of some of the most important American political figures of the past half-century.

MORE: Learn more at www.sundancebookstore.com. This event is made possible through a partnership with Nevada Humanities and with support from the Nightingale Family Foundation.