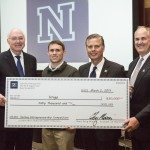 The University of Nevada, Reno’s Sontag Entrepreneurship Competition winner, Irrigo, is the recipient of $50,000, which will help further develop water efficiency services for flood irrigated agriculture. Using flood gate automation, field surveys and water and soil sensors all connected to the cloud, Irrigo is developing a more efficient way to irrigate agricultural fields.
“Water is a precious resource,” Irrigo Team Leader Brian Blair said. “Irrigo’s intent is to save 20 percent of the water currently used through irrigation in the Western United States. Irrigo will provide efficiencies to the farmer as a leased service, through which the farmer can realize immediate savings in labor and increased crop yield through greater acreage under irrigation.”

University alumnus Rick Sontag, ’66, for whom the annual competition is named, announced the winner via Skype at a luncheon ceremony at the Joe Crowley Student Union Monday, March 3. Sontag’s $1 million gift to the University created the competition in 2011. The competition was established by the University’s College of Business to develop the entrepreneurial capacities of University students and facilitate the creation of new businesses in Nevada.
“This competition has fostered seven businesses to grow and develop in northern Nevada this semester alone,” Dave Croasdell, Charles and Ruth Hopping professor of entrepreneurship and Sontag Entrepreneurship competition director, said. “They will help spur the economic growth of our community.”
Wasted Eyewear, founded by University freshman Julian Sander, won second place and received $5,000. Sander’s goal is to make highly functional sunglasses out of recycled and reused material, mainly old snowboards.
“The Sontag Entrepreneurship Competition has helped grow our entrepreneurship program and paid a huge dividend to help the economy develop in northern Nevada,” College of Business Dean Greg Mosier said.
This year, 24 student teams submitted full business plans into the competition. In December 2013, seven were selected as finalists and given $1,000 to validate their business model or product along with additional mentoring and workshops before they presented to the finalist judges Friday, Feb. 28.
“When my wife and I first began speaking with the University about a gift, our conversation evolved into helping an enterprise,” Sontag said at the luncheon. “At the beginning I was unsure but was pleasantly surprised that first year. Now there is no doubt in my mind of this program’s worth and the caliber of candidates that come from this competition.”
Last year’s winner, EscaZyme Biochemicals, discovered enzymes in bark beetles from trees in the Lake Tahoe area that have the potential to be used for a wide range of products, including pesticide. It has gone on to secure several contracts with forest service companies and is working to develop a skin care line using that same enzyme.
The College of Business now offers six entrepreneurship classes as part of its undergraduate program and two classes as part of the MBA program. Additionally, students interested in the Sontag competition are invited to attend workshops throughout the semester that help connect them with key leaders in the community and further develop their marketing and business plans. Learn more at www.unr.edu/sontag.