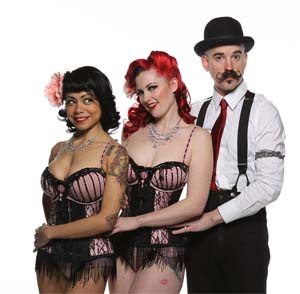 The Pretty Things Peepshow is an old time girly roadshow that will transport you back to a time when men were men and women were fabulous! Take a trip to the shores of Coney Island as they perform their stunning sideshow stunts then peek into Gypsy Rose Lee’s strip tent in Chicago worlds fair as their burlesque beauties tease and please their way into your hearts. This show offers you not only a night of stunning entertainment but a heartwarming and heart pounding look into American entertainment history.

This star studded cast has been seen on TV and has graced stages all over the globe.
The current cast includes: The Indestructible Woman and 2 time world record holding sword swallower: Brianna Belladonna, The Impresario of Undress: go-go Amy, World Famous Pin Up Model and The Ballerina of the Blades: Frankie Sin and The Dapper Dan of Danger: Mr Donny V. See all 22 of their big acts in this amazing one of a kind show including juggling, whip cracking, human blockhead, ladder of swords, sword swallowing, classic burlesque, Chinese execution blade box, belly dance, comedy, magic and more!

The have performed in: Australia, Scotland, England, Ireland, Belgium, The Netherlands, Germany, Austria, Canada and the US,