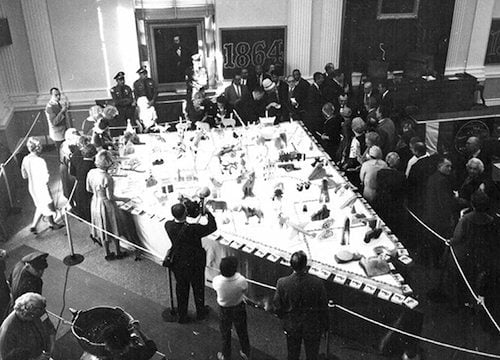 The celebration marks the 150th anniversary of the day — March 21, 1864 — President Abraham Lincoln signed legislation enabling Nevada to become a state. Nevada Territory went on to join the union later that year, on Oct. 31, 1864.

The event, one of many held throughout the year to mark Nevada’s sesquicentennial, will feature entertainment and a large birthday cake similar to the one created for Nevada’s centennial celebration in 1964.

The Battle Born Birthday Cake Committee has undertaken the challenge of creating the Nevada-shaped cake, expected to weigh in at 1,300 pounds with frosting. The 13-foot-by-21-foot cake will provide 9,000 slices of cake; before the event, first lady Kathleen Sandoval will cut the confection using a sword of Nevada’s fifth governor, Gov. Charles Stevenson.

“The Battle Born Birthday Cake Committee deserves a huge thank you for creating such a ‘sweet’ event — pun intended,” Lt. Gov. Brian Krolicki, chairman of the Nevada Sesquicentennial Commission, said. “As someone who has a real sweet tooth, what better way to celebrate Nevada’s birthday than with cake weighing in at over 1,300 pounds. Tying in the history of Nevada’s centennial  celebration with the sesquicentennial makes this occasion all the more special.”

Festivities will include a performance by the state’s “honorary Sesquicentennial poet,” Waddie Mitchell; an appearance by Mark Twain impersonator McAvoy Layne; a performance by Dianna Borges, who will portray Paiute educator Sarah Winnemucca; the University of Nevada, Reno Cadet Marching Band; and Virginia City musician James Lee Reeves, who will debut his Nevada 150 anthem “Battle Born, Nevada Proud.” Special appearances by other historical Nevadans, Nevada Sesquicentennial Commission members and others are scheduled. Along with the public, those whose birthday falls on Oct. 31 are invited to attend the event and take a photo with all other birthday attendees.

“Carson Tahoe Health is excited to host this historic event celebrating this special day in our state’s capital, where it all began,” Ed Epperson, CEO of Carson Tahoe Health, said. “As a community partner, we are proud to be a part of Nevada’s sesquicentennial , and look forward to the celebration.”

Nevada’s sesquicentennial, the 150th anniversary of Nevada’s admission to the Union, will provide opportunities for celebration and reflection as Nevadans come together statewide to commemorate shared history and build a foundation of cultural appreciation for generations to come.  Nevada’s one-of-a -kind and diverse history will be celebrated throughout the state for an entire year to promote pride in the shared heritage of all Nevadans. Nevada’s sesquicentennial celebration commenced on Nevada Day 2013 and will conclude with an expanded Nevada Day celebration in October 2014. For more information, please visit www.nevada150.org.

Celebrate Nevada’s Sesquicentennial at one of these fun July events

Four Nevada Day parades set to be held around the...