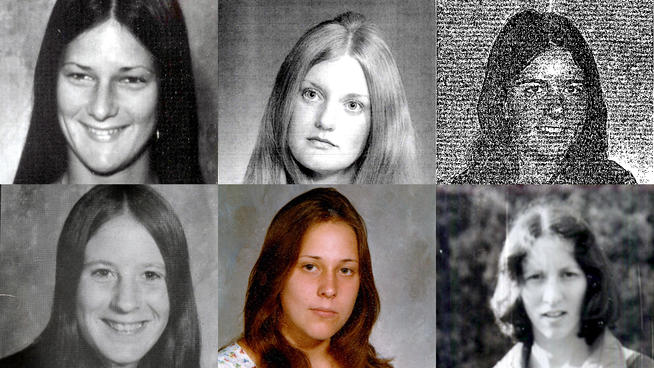 The agencies will be following up on leads and also canvassing several areas seeking information regarding the following crimes:

Veronica “Ronnie” Cascio
Last Seen: 1/7/1976
Body recovered: 1/8/1976
City: Pacifica, Calif.
On Jan. 7, 1976, 18 year old Veronica “Ronnie” Cascio was last seen in the Fairway neighborhood of Pacifica walking from her home to the bus stop located at the corner of Bradford Way and Fairway Drive in Pacifica. Her body was found the next day at the Sharp Park Golf Course. This is currently being investigated by the Pacifica Police Department.

Paula Baxter
Last seen: 2/4/1976
Body recovered: 2/6/1976
City: Millbrae, Calif.
On Feb. 4, 1976, 17 year old Paula Baxter was last seen leaving the parking lot of Capuchino High School in Millbrae, California. Early the next morning her car, a bronze 1972 Chevy Vega station wagon, was located parked on a nearby residential street. Her body was found 2 days later hidden in the brush behind the Latter Day Saints Church on Ludeman Lane. This is currently being investigated by the San Mateo County Sheriff’s Office.

Michelle Mitchell
Last seen: 2/24/1976
Body recovered: 2/24/1976
City: Reno, Nevada
On Feb. 24,1976, at approximately 8:10 pm, 19 year old University of Nevada-Reno student Michelle Mitchell’s vehicle broke down at the intersection of 9th Street and Evans Avenue in Reno, Nevada. Someone assisted her in pushing the vehicle, a yellow, early 1970s Volkswagen Bug, into the parking lot located across from the UNR agricultural building on Evans Street. Her body was found that evening in the garage of a nearby home. This is currently being investigated by the Reno Police Department and Washoe County Sheriff’s Office.

Carol Lee Booth “Beedy”
Last seen: 3/15/1976
Body recovered: 5/4/1976
City: South San Francisco, Calif.
On March 15, 1976, 26 year old Carol Lee Booth was seen walking from the bus stop on El Camino Real at Arroyo Street in South San Francisco towards her home. She was known to use a common shortcut across an open area between Kaiser Hospital and Mission Road near the former El Camino Driving Range. Her body was located months later hidden in the brush in the same area. This is currently being investigated by the South San Francisco Police Department.

Denise Lampe
Last seen: 4/1/1976
Body recovered: 4/1/1976
City: Daly City, Calif.
On April 1, 1976, 19 year old Denise Lampe left the Serramonte Mall in Daly City, California and returned to her vehicle, a 1964-1/2 Mustang, parked between Macy’s and Denny’s Restaurant. Her body was found that evening inside her vehicle at the same location in the mall parking lot. This is currently being investigated by the Daly City Police Department.

Based on the forensic links between a number of the cases, the time frame of the murders, and the methods used by the offender to commit these crimes, investigators are confident all of the crimes were committed by the same offender. Law enforcement is asking the public for any information concerning any of the individual unsolved cases, including any connections between the California and Reno cases. Law enforcement officers will be canvassing a number of areas to determine whether anyone has any information.

The FBI San Francisco Field Office will be coordinating all tips and leads. Anyone with information is urged to contact 415-553-7400 then press 0 and advise it is in regards to the Gypsy Hill cases. All calls are confidential.