By Chris Moran March 6, 2014
"Natural Balance," a Giclee print by Paula Morin, is seen in this handout photo. 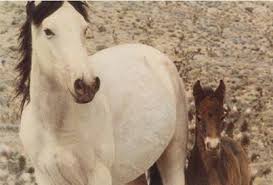 “Natural Balance,” a Giclee print by Paula Morin, is seen in this handout photo.

SPARKS, Nev. — “Honest Horses: A Portrait of the Mustang in the Great Basin,” an exhibit of photographs by Paula Morin, is on display through April 5 at the Sparks Museum & Cultural Center, 814 Victorian Square in Sparks.

Morin’s pictures depict an uncommon view of the significance of the wild horse to the Great Basin, according to a news release from the Sparks Museum. Wild horses conjure up an image of mythical proportions. Not only are they a reminder of the country’s emergence as a nation, but their role in the evolution and history of the American West and impact on Native American culture is profound.

The original photographs and narratives were made during 1999-2001. Morin photographed wild horse herds in their natural surroundings and recorded her discussions with people whose lives are most intimately connected with them. A synergy of image and word portrays the intricate relationship of wild horses to the culture and landscape of the Great Basin – from yesteryear to the present. The exhibition contains 21 giclée prints made from Morin’s original hand-painted black and white photographs and is accompanied by an education guide written by Steve Pellegrini.

Curated by Morin and organized by the Nevada Arts Council, “Honest Horses: A Portrait of the Mustang in the Great Basin” is part of Nevada Touring Initiative-Traveling Exhibition Program. It was funded in part by the National Endowment for the Arts and the Nevada State Legislature. The Nevada Arts Council is a division of the Department of Tourism and Cultural Affairs.