Upon arrival, officers found a victim obviously deceased and in a state of decomposition indicating that he had died several days earlier; however, a time frame could not be definitively identified.

An autopsy was performed and numerous stab wounds were located, lending a preliminary ruling as the manner of death being a homicide. 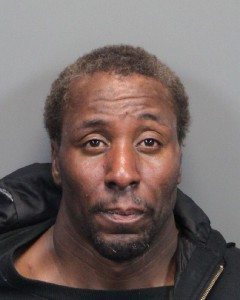 Paperwork belonging to the suspect (listed below) was located in the room and further investigation revealed that he, the suspect, had been arrested by Reno Police on March 9th, 2014 after he showed up at the police station and called 911 requesting assistance.

At that time, he had quite a bit of blood on his person and some injuries that were bleeding, but did not give any discernible information about a location of a crime or victim.

Thus, officers were not able to develop any information that the Flamingo or the victim were involved.  Ultimately, he was arrested for misuse of 911 and booked into the Washoe County Jail, where he currently remains.

With the assistance of the Washoe County Crime Lab, DNA testing was performed on March 25 and 26, on the clothing the suspect was wearing on March 9, and the victim’s DNA was located in numerous areas.

This information, along  with the comments made to 911 and the officers on scene of the original call on March 9th, the Reno Police Department was able to develop probable cause for the arrest of the suspect for the charge of murder.  The suspect has been additionally charged and remains in the Washoe County Jail.

He is the only known suspect at this time; however, if anyone has any information about the incident or the suspect, please call the Reno Police Department.