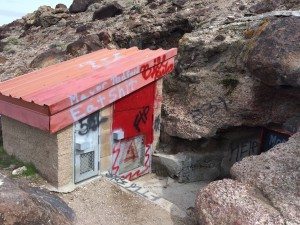 CARSON CITY – The Bureau of Land Management (BLM) is offering a $1,000 reward for information leading to the arrest and conviction of the person or persons responsible for the recent vandalism found at Hidden Cave.

Hidden Cave is an archaeological site east of Fallon, Nev. Thousands of artifacts have been discovered in the cave over the years and have provided important information about the inhabitants. Prehistoric human use of the cave ranges from about 800 to 5,000 years ago.

Graffiti was found on both the interior and exterior of Hidden Cave, along with bullet holes in the informational kiosk. Graffiti was also observed on several rocks on the trail leading to the cave. There was evidence of digging in the archaeological site as well as obvious damage to the interpretation signs, educational displays, and lighting in the cave. Those with information about the crime should call the BLM Crime Hotline phone number at: 1-800-521-6501. 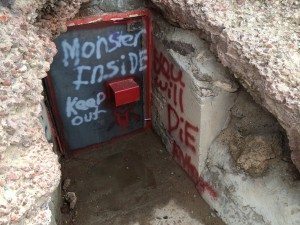 “This is the first instance of modern vandalism to the sensitive archaeological resources within Hidden Cave,” said Jason Wright, Archaeologist for the BLM’s Stillwater Field Office. “Damage to America’s public heritage, culture, and history is a felony crime and most disrespectful.”

A media tour of the damaged site will be offered tomorrow. The group will meet at the Hidden Cave parking area at 1 p.m. and the tour will last approximately two hours. While the area is close to parking, access will require a short hike over some rough terrain thus appropriate footwear is important for those joining the tour. BLM and Churchill County Museum officials will be available for interviews at that time.