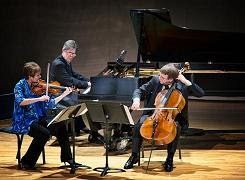 RENO CHAMBER ORCHESTRA NEWS RELEASE – The music of Ludwig van Beethoven is featured in concerts by the Reno Chamber Orchestra on Saturday, March 22 at 7:30 p.m. and Sunday, March 23 at 2:00 p.m. at Nightingale Concert Hall on the University of Nevada, Reno campus.

These all-Beethoven concerts, part of the Reno Chamber Orchestra’s 2013-14 season, include a performance by the Argenta Trio – violinist Stephanie Sant’Ambrogio, cellist Dmitri Atapine, and pianist James Winn, the University of Nevada, Reno’s resident chamber ensemble. They will play Beethoven’s Triple Concerto with RCO music director Theodore Kuchar and the Orchestra. These concerts also include Beethoven’s well-known “Turkish March” from The Ruins of Athens, the Symphony No. 4, and the Romance No. 2 for violin and orchestra with Ms. Sant’Ambrogio.

Stephanie Sant’Ambrogio enjoys a varied performing and recording career as a soloist, chamber musician and orchestral leader. She has performed as a soloist and chamber musician on the foremost stages of the U.S., as well as in Canada, Estonia, Sweden, Ghana, Italy, Peru and Mexico. Currently associate professor of violin and viola at the University of Nevada, Reno, she is also artistic director of Cactus Pear Music Festival, which she founded in 1997 while serving as concertmaster of the San Antonio Symphony. Former first assistant principal second violin of the Cleveland Orchestra, she toured and recorded internationally with this ensemble for eight seasons. Concertmaster of California’s Fresno Philharmonic and Ohio’s Lancaster Summer Festival Orchestra, Ms. Sant’Ambrogio has a discography of over seventy-five orchestral and chamber music CDs.

Dmitri Atapine has appeared on some of the world’s foremost stages, including Alice Tully Hall at Lincoln Center, Zankel and Weill Halls at Carnegie Hall, Chicago Cultural Center, and the National Auditorium of Spain. Mr. Atapine is making his debut this season with the Chamber Music Society of Lincoln Center, and his frequent festival appearances have included [email protected] Music Festival, La Musica Festival Sarasota, Nevada Chamber Music Festival, Cactus Pear Music Festival, and Aldeburgh Festival. He has won top prizes at the Carlos Prieto International, Florian Ocampo, and Llanes cello competitions. His recordings can be found on the Naxos, Albany, Urtext Digital, BlueGriffin and Bridge labels. Artistic director of the Ribadesella Chamber Music Festival (Spain) and Argenta Concert Series, Mr. Atapine is cello professor at the University of Nevada, Reno.

Theodore Kuchar is the most recorded conductor of his generation, with over 100 compact discs to his credit on the Brilliant Classics, Naxos, Marco Polo, and Ondine labels. His CD “Latin American Classics” with the Orquesta Sinfónica de Venezuela was nominated for a 2013 Latin Grammy Award. Kuchar holds the posts of RenoChamber Orchestra music director, artistic director of the RCO’s Nevada Chamber Music Festival, music director of the Fresno Philharmonic, artistic director of the Orquesta Sinfónica de Venezuela, and conductor emeritus of the National SymphonyOrchestra of Ukraine. He has collaborated with world-renowned artists like James Galway, Joshua Bell, Itzhak Perlman, Yo-Yo Ma, Lynn Harrell, Jessye Norman, Sarah Chang, Mstislav Rostropovich, and Frederica von Stade.

Tickets and more information are available at RenoChamberOrchestra.org or by calling 775-348-9413. Ticket prices range from $22 to $45 for adults. Everyone eighteen and younger, and all full-time students, can attend for $5.

The Reno Chamber Orchestra, founded in 1974, provides the highest quality performances of repertoire written for smaller orchestra. It works to instill and promote the appreciation of music among audiences diverse in age, backgrounds and interests throughout the region. Along with its regular season of concerts, the Reno Chamber Orchestra presents the annual Nevada ChamberMusic Festival in December. More information can be found at RenoChamberOrchestra.org.