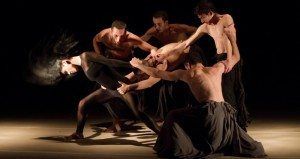 UNR NEWS RELEASE — Budapest. Warsaw. Seoul. Tel Aviv. And Reno! During its scheduled world tour with stops in cosmopolitan cities around the globe, the world-renowned Israeli troupe Kibbutz Contemporary Dance Company (KCDC) has chosen to perform in only three U.S. cities: Dallas, Los Angeles and — lucky for us — Reno.

Led by Rami Be’er, one of the dance world’s most esteemed choreographers, the Kibbutz Contemporary Dance Company combines dramatic high-energy moves in mesmerizing patterns of unison with free-flowing solos and duets. Their unique approach to full-body modern dance inspired the noted New York Times critic Anna Kisselgoff to share high praise: “…the performance of the cast and the purity of the choreography will win you over!”

Supported in part by a grant from Israel’s Office of Cultural Affairs, Kibbutz brings its remarkable dance troupe to Reno as part of the University of Nevada, Reno’s 2013-14 Performing Arts Series, Thursday, February 20 at 7:30 p.m. in Nightingale Hall on the university campus.

The company’s Reno performance, titled “If At All,” has been choreographed as a modern and moving theatrical piece about diverse and ever-changing interpersonal relationships. Music for the piece includes an eclectic mix from such groups as Nine Inch Nails, Massive Attack and Volcano Choire.

Kibbutz Contemporary Dance Company is based in Israel at Kibbutz Ga’aton, where the troupe serves as both a dynamic performance company and a rigorous educational program that trains novice and seasoned dancers as international ambassadors for peace and goodwill.

The company’s dynamic performances and inspiring work around the world have garnered numerous accolades from news media and dance critics alike. According to the Jerusalem Post, “If our political leaders are looking to do something about our profile in the international community, they would do well to take a leaf out of the aesthetically delightful and spiritually uplifting book of the Kibbutz Contemporary Dance Company.”

Founded in 1973 by Yehudi Arnon, a Czechoslovakian-born Holocaust survivor, the KCDC program has drawn talented dancers from around the world to train and study in Israel. The company has been led since 1996 by its artistic director Rami Be’er, who began his dance training under Arnon’s tutelage at the age of three. In January 2014, KCDC performed in Budapest to commemorate the 70th anniversary of the Holocaust that overtook the Jewish community in Hungary in 1944. For more about Kibbutz Contemporary Dance Company, visit http://kcdc.co.il/en