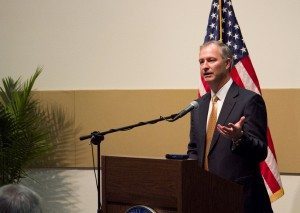 CJCL filed the lawsuit on behalf of Michael Little, an alternative-energy entrepreneur and a taxpayer whose alternative-energy competitor, SolarCity, has received a commitment from GOED to provide it with a $1.2 million taxpayer-funded subsidy. Named defendants in the lawsuit include the State of Nevada, the Governor’s Office of Economic Development, and GOED Executive Director Steven Hill.

State subsidies to a private business, according to the complaint, violate Article 8, Sections 9 and 10, of the Nevada Constitution. Article 8, Section 9 reads, “The State shall not donate or loan money, or its credit, subscribe to or be, interested in the Stock of any company, association, or corporation, except corporations formed for educational or charitable purposes.”

“Fully aware that Nevada’s constitution prohibits business subsidies by state government, politicians have tried to circumvent this constitutional prohibition by routing Catalyst Fund payments through local government agencies that it itself authorized to provide handouts. But GOED is still selecting and approving the subsidy-fund recipients and may not contract with or delegate to others authority it itself does not have.

“Having a so-called regional development authority or a local government give money it received from the state to a private business doesn’t change the fact that state taxpayer dollars are going to private businesses in violation of Nevada’s constitution,” said Becker.

In 1992, 1996 and 2000, Nevada voters overwhelmingly rejected proposed constitutional amendments that would have allowed government loans or gifts to, or so-called “investments” in, private businesses.

“We urge the court to uphold and defend Nevada’s constitution by holding that subsidies through the Catalyst Fund are unconstitutional.”

Becker also noted that forcing a business to subsidize its competitor is fundamentally unjust and that similar programs in other states have led to charges of political favoritism.

“Taxpayers, at the federal level and in states like Texas, have given hundreds of millions in loans and subsidies to the companies of politically connected donors,” said Becker. “After receiving taxpayer handouts, numerous companies, including Solyndra, Abound Solar, Fiskar and ThromboVision, have gone belly-up. Along with being unconstitutional and unjust, GOED subsidies are bad economics.”

The lawsuit calls for the court to: