Lost in wilderness – two dogs home thanks to microchips 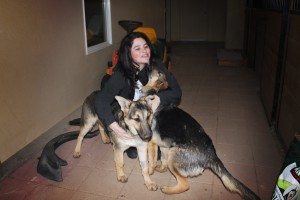 “Jack Jack” and “Lulu” happy to be back home with Joyce Huet.

WASHOE COUNTY SHERIFF’S OFFICE NEWS RELEASE – Two lost young German Shepherds, five-month-old “Lulu” and six-month-old “Jack Jack” were located last Tuesday afternoon in the wilderness area north of Peavine Mountain and west of Cold Springs. A hiker spotted them, Regional Animal Services rescued them, but it was their microchips that got them home.

Fortunately, both dogs had microchips, and all it took was a few phone calls. The dogs are part of the Huet family who live on a ranch about 10 miles from where the dogs were spotted. Joyce Huet says the dogs must have got out sometime in the morning, after she and her husband had left for work, and that she was amazed by the amount of distance they covered in such a short time.

“Just the thought of losing ‘Lulu’ and ‘Jack Jack’ is devastating,” she said. “Without those microchips, we might not have seen them again. As it is, the whole family is loving having our dogs back home.”

“Lulu” and “Jack Jack” disappeared on Tuesday morning and were back with their family by Tuesday night, the same day that Washoe County Regional Animal Services announced that they were extending their free pet microchipping campaign for two years.

“Time and time again microchips have proven themselves as the most effective and efficient means for getting pets home,” Regional Animal Services Director Barry Brode said. “In many cases, pets are returned to their homes without ever having to be brought to the shelter.”

“We encourage all pet owners, even those who think their pets never leave home, to take advantage of this free service,” Brode said.

Once microchipped, Animal Services encourages pet owners to register their microchip online at homeagain.com to ensure proper identification if the pet should ever become lost outside of Washoe County.