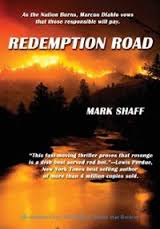 Redemption Road by Mark Shaff
A family outing turns into a nightmare when Annie Diablo goes missing while backpacking in the Eastern Sierras with her husband Marcus and their two young sons. Despite Marcus’s claims that Annie was abducted by a group of homegrown terrorists, planning to set fire to forests in and around Yosemite National Park, the FBI is convinced Marcus is responsible. But when, from California to Connecticut, the nations largest forests and grasslands simultaneously erupt in flames, it becomes clear that Marcus was innocent. While the country teeters on the brink of chaos, whatever effort was spent on finding Annie is now directed elsewhere. What begins as a man’s desperate search for his wife turns into a journey of redemption that will take Marcus from the security of his home, to the harsh Australian Outback, to the lawless tribal lands of the Middle East, to the unforgiving waters of the Bering Sea. If Marcus is to succeed and find those responsible, trust will have to be earned, death cheated, and the limits of human perseverance pushed. Along his road, Marcus’s life and the lives of everyone he touches will be changed forever.

About the Author: Mark Shaff lives in Reno with his wife and two teenage sons. He owns a hardwood floor company that specializes in the use of reclaimed and hand distressed materials. He enjoys skiing, backpacking and fly-fishing and spends as much time as he can in the western and eastern Sierra Nevada mountains.

Currents of Deception by M.C. Davis
Kaitlin, an undercover operative for an international agency, is assigned to investigate an alleged drug distributing ring in the Seattle/Northwest area of the United States that may have international connections. At the same time, she is asked by a friend to see if his sister, Sadie, might be involved. Kaitlin must befriend Sadie and ultimately find her killer. Kaitlin’s skills at diving and investigating are put to the test when she begins diving in the strong currents of the Pudget Sound during her investigation, and in the process discovers that the currents of the waters are not the only currents swirling around her that dangerous. Aided by Graham, an operative sent to assist and possibly spy on her, Kaitlin must solve the issues of the investigation while trying not to be killed by those she trusts in the process.

About the Author: M.C. Davis lives and works in the Reno-Sparks area of Nevada with her husband and two dogs. When not writing, she enjoys spending time out of doors at Tahoe and the surrounding areas in Northern Nevada and California, making jewelry, quilting, cooking, and thinking up new topics to keep her character Kaitlin busy. She is very fortunate to have family and friends who have encouraged her to take this first step in becoming a writer.