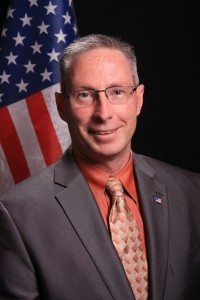 Allen has been a community leader in Washoe County for more than two decades in his job as a Nevada Highway Patrol Trooper, a senior ranking member of the Nevada Air Guard and as a volunteer for organizations including the Nevada Humane Society and Special Olympics Nevada.

“I have been a part of the command staff team at both the Highway Patrol division and Department of Public Safety-Director’s Office for the past 10 years. This, coupled with nearly 30 years of military service, as well as serving in active leadership positions on many non-profit boards of directors, has provided me a wealth of diverse leadership and experience. I know the importance of providing accurate and timely information and how to engage the public,” says Allen.

Allen has been in law enforcement for 23 years with the NHP, serving as their public information officer for the last 10 years, advising drivers about traffic safety. He believes the Washoe County Sheriff’s Office needs to strengthen community outreach and communication with the residents of Washoe County.

“I’m excited for this opportunity to step up my commitment to my community by running for Washoe County Sheriff,” Allen said. “I believe the Sheriff’s Office needs to keep our residents safe, communicate better with the community and be more efficient with tax dollars.”

Chuck has donated thousands of hours to local charities and has created successful fundraising events, which is one of the reasons the Reno Gazette-Journal selected him as Citizen of the Year in 2010 and Governor Brian Sandoval recognized him in his State of the State address in 2011.

“Coming from outside of the Sheriff’s office I’ll have the ability to better evaluate the effectiveness of the operation and implement changes to improve efficiencies. The trust, respect and credibility I have earned from the citizens and my peers, along with my commitment to family, community, state and country, are a testament of my character.”

Allen has lived in Reno since 1987. He has been married for 21 years to Teresa, and together they have two grown children, Bailey and Sheldon, and three dogs.