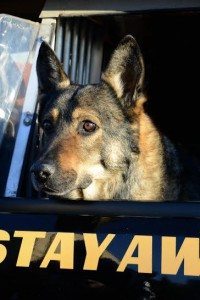 CITY OF RENO NEWS RELEASE – On the morning of January 1, 2014, Reno Police Service Canine Xero passed away at his handler’s residence in North Reno.

Xero was recently diagnosed with an inoperable medical condition and his passing was a result of complications of that condition. Xero was partnered with Reno Police Officer Steven Mayfield in June of 2007, and was an asset to the department and community which he served. Xero and Officer Mayfield assisted every unit of the Reno Police Department as well as all of the local, state and federal law enforcement agencies in Northern Nevada.

Xero was instrumental in locating large amounts of drugs, and in the arrests of those suspected of selling drugs. Xero also spent many hours at Police Canine Demonstrations with local children who enjoyed his loving disposition. As a dual-purpose police service canine, Xero also tracked criminals, located evidence and protected his fellow officers.