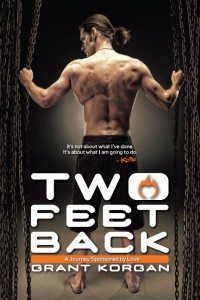 
What: Local author Grant Korgan will read and sign his memoir, Two Feet Back (Lucky Bat Books), which tells the inspiring story of his road to recovery from a severe spinal cord injury.

About Two Feet Back: A painfully honest, inspiring memoir of a man whose broken back taught him to stand in his truth. One moment, Grant Korgan had everything he’d ever wanted—a successful career, a new marriage to the love of his life and an athletic body that enabled his constant pursuit of world-class adventure sports. The next, he found himself lying in the snow, with no feeling or movement below his belly button. But this is not a book about the paralyzing grip of a spinal cord injury or the struggle to walk again. Rather, Grant’s story of survival, unbound love, endless gratitude and the limitless power of unwavering positivity is one that applies to us all. It’s about living big, remembering and finding the greatness that lies within all of us, and living the highest version of yourself regardless of your circumstances. Determined not to change a single goal of the past, the Korgans embarked on an unconventional, activity-based recovery plan that bucked the prognosis that Grant’s long-cherished independence was gone forever. Two Feet Back is Grant’s account of this incredible first year of recovery, the Korg 3.0 movement it inspired, and how the path to getting back on his own two feet back gave him a lot more than he bargained for.

About the Author:  Grant Korgan grew up in the Reno/Tahoe area, was a research project leader in the field of micro-and nanotechnology, and a professional snowmobile rider and whitewater kayaker by weekend, until March 5, 2010, when he sustained an injury to his first lumbar vertebra while filming a day of snowmobiling in the Sierra back country. Since then, he has been constantly working toward his eventual goal of 120 percent recovery, training daily as part of a rigorous, activity-based recovery plan, of which his wife, Shawna, is an integral part. Grant now speaks publicly about his experiences to pay forward his amazing recovery.