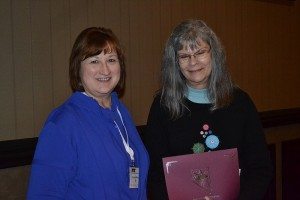 During the award presentation, Dressler thanked Douglas County Farm Bureau and members who help participate and give educational presentations at each Ag Days. “I am a the fifth generation Nevadan involved in agriculture, and if it weren’t for Ag in the Classroom materials and volunteers, my granddaughter who is seventh generation would not know where the food on the table comes from,” Dressler said. “Ag in the Classroom is so vital for our students and I thank the Nevada Agricultural Foundation for this award.”

For more information on the Nevada Agricultural Foundation visit their website at http://nevadaagriculturalfoundation.org/.