By ThisIsReno December 11, 2013
Courtesy of the Southern Nevada Water Authority. 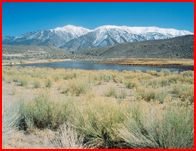 BAKER — A Nevada court today resoundingly rejected the Nevada State Engineer’s allocation of some 84,000 acre feet per year of groundwater in four rural valleys that the Southern Nevada Water Authority planned to pump and pipe water to Las Vegas.

In a strong, well-grounded decision, Senior Judge Robert Estes of the Seventh Judicial Court of Nevada declared the State Engineer’s decision “subjective, unscientific, arbitrary and capricious,” and “unfair to following generations of Nevadans” and “not in the public interest.”

Estes’ ruling requires the State Engineer to recalculate and reassess the water available for appropriation from Spring Valley to assure that “the basin will reach equilibrium between discharge and recharge within a reasonable time,” and to “recalculate the appropriations for Cave, Dry Lake, and Delamar Valleys to avoid over appropriations or conflicts with down-gradient, existing water rights.”

The Court also required that the State Engineer add Millard and Juab counties, Utah in the mitigation plans for the groundwater development project because they will be affected by the proposed pumping from Spring Valley.  Estes was highly critical of the project monitoring, management and mitigation plans, finding that the Engineer had, in effect, “relinquished his responsibilities” to SNWA.

Steve Erickson, Utah coordinator for the Great Basin Water Network, a lead plaintiff in the case, called the ruling “a huge victory for the families and communities of these rural valleys in Nevada and Utah, and a vindication of our collective efforts to resist a massively misguided and destructive project.

“This ruling affirms our long-held positions that groundwater withdrawals of this huge scale are not sustainable and can’t be effectively managed or mitigated, will pre-empt existing water rights, and will cause permanent, widespread damage to the environment, the economy, the health, and the quality of life in the Great Basin,” Erickson said.

Abby Johnson, president of the Baker, Nevada-based Network said, “this decision should send a clear message to SNWA and Nevada leaders that this project is doomed to fail and should be cancelled now in order to save Las Vegas ratepayers and Nevada taxpayers billions of wasted dollars.”