Cooperative Extension to test large-scale production and use of biochar 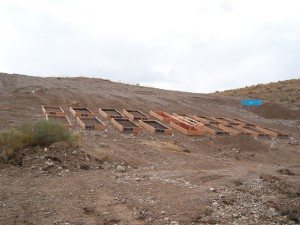 University of Nevada Cooperative Extension, with other partners, is embarking on a large-scale three-year project to find more efficient ways to increase water conservation and plant growth, and decrease the release of fossil fuel in the Great Basin.

Cooperative Extension, in partnership with Eureka County, the Nevada Department of Agriculture Agricultural Research Service, the U.S. Forest Service, the Eastern Nevada Landscape Coalition and the Nevada Department of Wildlife, is testing a “mobile rotary pyrolysis reactor.” The machine works by baking woody debris left behind from harvest, logging or mine site-clearing without using oxygen. This produces a charcoal-like substance called biochar, as well as bio-oil and bio-gas. Theoretically, the bio-gas can be burned for energy and can power the reactor, the bio-oil can be collected and refined, and the biochar can be added to soil to increase the soil’s productivity and water retention.

This will be the first large-scale field test of the reactor and the biochar’s uses. Applications of biochar will be tested in Eureka County’s Diamond Valley and the Ruby Hill Mine.

“One of our top reasons for testing in Diamond Valley is that historically, water has been over allocated and over pumped there, leading to water scarcity,” Eureka County Extension Educator Fred Steinmann said. “The farmers are already adopting new technology to preserve crops and stretch their water usage, but the Diamond Valley aquifer is still close to collapse. Hopefully biochar can be used to help create a sustainable agricultural landscape in a community like Eureka that has a long and proud tradition of agriculture.”

“We’re looking at biochar for its ability to lock and retain water,” Steinmann said.

The Ruby Hill mine is also looking to close soon, as it is no longer profitable because of the drop in gold and the dwindling amount of other ores. Federal and state law requires that closing mines create a reclamation plan for the trailing piles, or piles of rock and soil removed from the mine.

“Because the debris was underground, it is sterile and is susceptible to floods and erosion,” Steinmann said. “We want to use biochar as a soil amendment — something added to the soil that allows for microorganisms, and eventually plants, to grow.”

Cooperative Extension is currently testing different biochar mixes and various seeds in small plots at the mine. Next spring, the best combination will be used for the large-scale test on a large section of the remaining trailing piles.