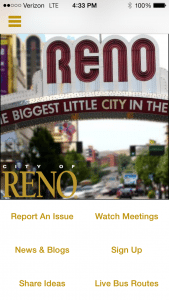 CITY OF RENO NEWS — The City of Reno is encouraging residents to add the new “City of Reno” mobile app to their smart phone and iPad or Android Tablet. The app can be found at both the iTunes and Google Play stores.

“It is another way for residents to engage with the City. The app has a variety of interactive communication channels that make it quick and easy for residents to get information or express a concern,” says Office of Communications and Community Engagement Director Deanna Gescheider.

The app features six ways to interact with the City of Reno:

In addition, residents can instantly report an issue, concern, problem or complaint through the mobile Reno Direct channel, and take advantage of GPS and camera capabilities. Mobile reports generated in this manner are routed to appropriate departments or individuals for handling and resolution using QAlert, a citizen request management software from QScend Technologies.

“While we appreciate the need for government openness and transparency, we take a great deal of care with what we share on those social media sites,” said Keith LeBeau, President and CEO of QScend Technologies. “Unlike other social Citizen Request Management (CRM) System tools that share the exact street location of an issue publicly, our app posts only that the user has submitted an issue using the app. No detailed location information is ever revealed due to privacy and liability issues for local governments,” says LeBeau.

In an effort to raise Ward awareness, residents can open the app’s interactive map anywhere in the city, and view which Ward they are currently located in, as well as view the City Council representative for that Ward. By using the interactive map, residents can also see their voting jurisdictions and Regional Transportation Commission (RTC) live bus routes, allowing real-time tracking of bus arrivals and departures from any bus stop in the City.

The integrated RSS news feed provides residents with up-to-date news and event happenings from the City.

Residents can easily access the link from this mobile app to watch live Council meetings from anywhere, at any time.

Finally, there is also a Think Reno idea portal where residents can actively help improve our City and guide the strategic direction of our local government by sharing their ideas.

The links to the access the mobile app are: