By ThisIsReno November 8, 2013
Ashley Hudson works in a hoop house at the High Desert Farming Initiative in Reno, Nev. / Photo by Erin Meyering 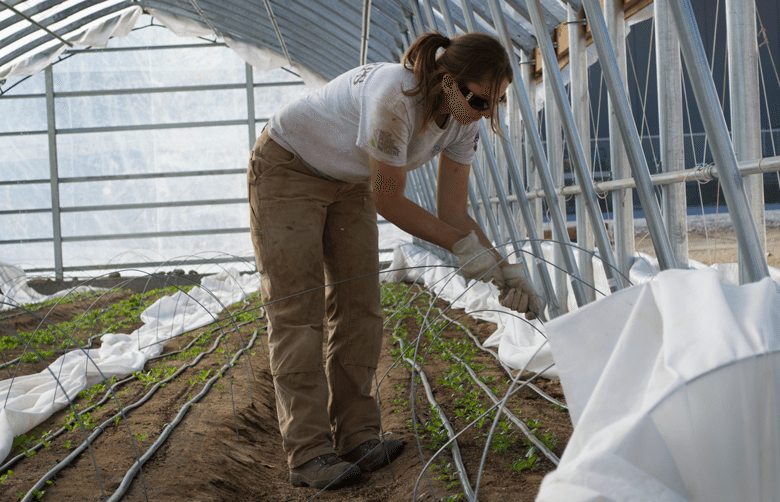 Ashley Hudson works in a hoop house at the High Desert Farming Initiative in Reno, Nev., which hopes to serve its greens at UNR in November. / Photo by Erin Meyering

The burgeoning local food scene in Northern Nevada has recently inspired many to take advantage of the fresh agriculture of the area. While the state has adopted a “we grow things here” mentality and locally owned restaurants appear to be thriving, has the University of Nevada, Reno – a center point in the community – adopted similar taste?

UNR is currently in the process of adding more locally grown food to the menu, grown directly on campus as part of the High Desert Farming Initiative (HDFI).

Over 5 years ago, the Nevada Small Business Development Center received a $450,000 grant out of the College of Business with the help of Sen. Harry Reid.

Although it took awhile to get going, the group is set in their mission to assist Nevada’s agriculture community. In collaborating with several forces like College of Agriculture, Biotechnology and Natural Resources
, College of Business, Cooperative Extension and others, they have seen much progress.

In addition, Lattin Farms is on board and Urban Roots allows five of their AmeriCorps volunteers to help out. Agricultural classes with required lab time also often help at the farm.

“Our goal is to have a student farm on campus,” said Jennifer Ott, HDFI’s project manager.

The group is currently growing several different types of organic greens like arugula, tatsoi, mizuna, and oak leaf lettuce, to name a few. According to HDFI, the greens are nearly ready and the facility is just waiting on permitting in order to sell directly to UNR.

Ott said HDFI has big plans in the pipeline to contribute to the local food movement in the area, including educational classes, a student farm stand, composting waste from UNR and expanding their produce variety.

“We have a lot of really great ideas and luckily we have the support to do it,” Ott said.

One argument against local food in the community on such a large scale is that it will cost patrons more money. However, UNR has already addressed this problem.

“We’re planning to absorb any initial increases,” said Russ Meyer, associate director for housing operations and dining services at UNR. “After that, we’ll look at annual increases to prices as part of an overall market basket evaluation that includes all products.”

Several years ago, UNR switched its produce supplier from Bonanza Produce to San Francisco Specialties primarily because of the company’s ability to get more of produce grown closer to UNR (“More from the Central Valley and less from Mexico,” Meyer said.)

“[In the past] it has been somewhat problematic to work with local purveyors or suppliers mostly because the inability to provide the quantity we need on the regular basis that we need,” Meyer said.

In addition, locally grown food, just like any other UNR purchased product, must be properly certified. Meyer said some smaller operators might not be able to afford the level or certification that UNR requires.

The key in moving forward with the initiative will be by strengthening communication between UNR and the local suppliers.

“The goal is to get [HDFI] on board so we can use as much local produce as possible,” Meyer said.

If everything goes as planned, HDFI’s salad greens will eventually be served predominately in Downunder Café and other dining facilities on UNR campus – though the Joe Crowley Student Union has separate contracts with each individual restaurant.

Chartwells holds the current food service contract at UNR, meaning they provide the retail outside of the student union including residential dining and Downunder Café. They also take care of hiring chefs and UNR’s catering for special events. Chartwells’ contract with UNR, which began in 1999, runs through June 30, 2019.

Before this contract, UNR had a record of having changed food service providers with mostly five-year contracts.

“We extended the [current] contract 15 years and it’s been a really stable thing and that means continuous improvement,” Meyer said.

About 2 years out before it ends, UNR will reevaluate its current contract, adjust for a proposal and decide on choosing a new supplier or keeping the existing one.

Regardless on what happens in the future, HDFI said its local greens are expected to be sold and distributed to UNR this month.