UNR professor to read from new collection of poems Wednesday 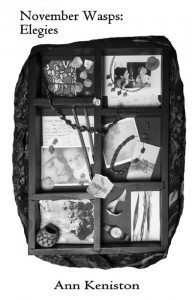 About the Book: November Wasps: Elegies, a sequence of 24 poems written over the seven years since the death of Keniston’s mother, chronicles a process of grieving that moves from anticipation through shock to reflection and distance. A deeply personal chronicle of Keniston’s relationship with her beloved but deeply private mother, the volume is also an attempt to make sense of larger mysteries of loss, grieving and absence.

Praise: “November Wasps takes grief apart and examines it in all its intricacies and contradictions. It’s a book that balances absence and presence, grief and love, loss and praise. Keniston strips away all clutter and superficial ornamentation to create poems of exactness and hard-earned clarity. While the first-person speaker is everywhere, there is an ethical and rigorous detachment, a rejection of self-pity that creates the sense of powerful feeling being held in check. It’s the intensity of that feeling that draws us to the poems, but it’s the holding back that devastates. November Wasps is a book of aching and mesmerizing truth.” – Steve Gehrke, local poet and fellow UNR professor

About the Author: Ann Keniston is the author of the poetry collection The Caution of Human Gestures (Wordtech, 2005) and the coeditor of The New American Poetry of Engagement: A 21st Century Anthology (2012). Her poems have recently appeared in Literary Imagination, Southwest Review, Tampa Review and elsewhere, and she has received grants from the Somerville (Mass.) Arts Council, the Sierra Arts Foundation (Nev.) and the Nevada Arts Council. An associate professor of English at the University of Nevada, Reno, she lives in Reno with her husband and teenage sons.