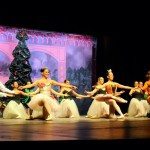 SIERRA NEVADA BALLET NEWS RELEASE – The Sierra Nevada Ballet will present the popular “Peanutcracker – The Story in Nut Shell” on December 6 and 7 in Carson City and December 17, in Reno. Based on Lev Ivanov‘s original ballet “The Nutcracker,” Peanutcracker is a shorter, 45-minute narrated version that is “designed for families with younger children to introduce them to the wonderful world of ballet,” noted Rosine Bena, Artistic Director of the Sierra Nevada Ballet. Bena who wrote and choreographed this traditional holiday show. This year’s performances will feature Dustin James from the Dance Theatre of Harlem and Chloe Felesina from Ballet X. In addition, over 50 local children will perform live on stage for this ‘must-not-miss’ holiday event.

In traditional fashion, PEANUTCRACKER – The Story in Nut Shell will open its public performance at the Carson City Community Center this year on Saturday, December 7. The shows are scheduled for at 2:00 p.m. and 7:00 p.m. Santa will make a special appearance before each show and will be on-site for photos until the start of each performance. Pre-show entertainment starts 45 minutes before each event with Show Youth Theater Carson City Show Stoppers presenting classic Christmas songs before the 2:00 p.m. event and Show Strings In School, lead by Sue Jesch, presenting holiday music prior to the 7:00 p.m. performance. Ticket prices start at $6 for youth (15 and under); all other tickets are $11 and can be reserved by calling Gina Nelson at 775-220-4452 or emailing [email protected] Tickets are also on sale on-site before each show.

Students throughout Northern Nevada area can enjoy this special holiday event on December 6 at the Carson City Community Center and on December 17 at the Pioneer Center for Performing Arts. Two performances are available at 10:30 a.m. and 12:30 p.m. For ticket information and school reservations, contact company coordinator Elizabeth Cuff at 775-997-4252 or email [email protected]

Bena was first inspired to create this special production for families by young audience members. After 25 years of performing the role of the Sugar Plum Fairy professionally, Bena came to discover through speaking with young fans that the Nutcracker was often children’s first introduction to ballet and often very young children found the full two hour ballet too long and difficult to follow. Bena produced her first mini version of the Nutcracker with narration in the San Francisco Bay Area in 1993. The short ballet with its growing Christmas tree and animated story telling proved to be very popular. She continued to present this (as the Artistic Director of Perspectives Dance Theatre and The Reno Ballet) to audiences in the San Francisco Bay Area every year through December of 2000 until Rosine moved permanently to Nevada and started the professional ballet company, Sierra Nevada Ballet.

Through the generosity of many sponsors, Sierra Nevada Ballet was able to invite thousands of “at risk” children to attend performances at the Pioneer Center for free and over 3,000 to attend at the reduced rate of $5. Individuals or businesses who are interested in helping to sponsor free tickets for the Carson City or Reno performances for schools should contact Sierra Nevada Ballet.

Versatile and innovative, Sierra Nevada Ballet is northern Nevada’s only professional ballet company and incorporates the popular with the experimental. Always a crowd pleaser, the Ballet offers music and different types of dance from well known classical to new age contemporary original pieces. Sierra Nevada Ballet is supported by the City of Carson Redevelopment for the Carson City event and by the Nevada Arts Council, the E.L Cord Foundation,The National Endowment for the Arts, Carol Franc Buck Foundation, Fascinating Rhythms School of Performing Arts and Western Nevada Performing Arts Center throughout the year. For more information, contact Sierra Nevada Ballet, at 775-737-9101. For press inquires, contact Lee Weber Koch with Weber & Associates at 775-832-6547.