NMA NEWS — The Nevada Museum of Art is the inaugural stop on the international tour of the exhibition Toulouse-Lautrec and La Vie Moderne: Paris 1880-1910. On view through January 19, 2014, the exhibition celebrates the broad spectrum of avant-garde artists at the center of the Parisian artistic and cultural scene at the turn of the last century. Featuring more than 185 objects, the artworks in Toulouse-Lautrec and La Vie Moderne range from paintings, watercolors, and drawings, to rare cabaret shadow puppets, illustrated theater programs, and other ephemera from Parisian theaters, circuses, and concerts.

The art of Toulouse-Lautrec epitomizes — in subject, style, and the use of new technology — many of the “modern” tendencies in French art at the turn of the nineteenth century. With his art as a central focus, Toulouse-Lautrec and La Vie Moderne is the first exhibition to present a kaleidoscopic view of the work of a generation of artists who continued the battle for artistic liberation from Academic standards fought by the Impressionists and by artists such as Seurat, Gauguin and van Gogh.

“Paris was the center of creative activity at the turn of the 19th century,” commented Amy Oppio, Deputy Director | COO, Nevada Museum of Art. “In this exhibition, the infamous Henri Toulouse-Lautrec is featured alongside others such as Mary Cassat, Paul Heleu, Juan Gris, and Pierre Bonnard. Museum visitors will certainly enjoy exploring the nightlife of cabaret theaters, elaborate circus performances, and intimate café concerts that helped to define Paris as an iconic modern city.”

Drawn from prestigious private collections, the artworks in this exhibition were made by a generation of artists who battled against the formality of Academic art standards. Toulouse-Lautrec and La Vie Moderne puts the innovative art of some bett 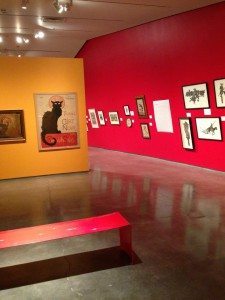 er-known artists into context, revealing that they did not work in isolation. Paris was a breeding ground for artistic and literary movements which challenged the establishment and sought to come to terms with a complex society no longer easily definable.

ART BITE Jodie Barker on Fin de Siècle Paris
Friday, December 13 / noon
Learn about the variety of forces affecting life in end-of-the-century Paris: the cultural and artistic avant-garde, the rise of cosmopolitanism, and changing understandings of the role of artists in the life of the city. $10 / Free Museum members

French Cancan (1954)
Sunday, January 5 / 3pm
Directed by the famed French director Jean Renoir, son of the famed painter Pierre-Auguste Renoir, this film tells the story of a business-scheme that aims to revive the can-can. $7 / $5 Museum members

This exhibition is organized and circulated by Art Services International, Alexandria, Virginia.
Lead sponsorship for the Nevada Museum of Art exhibition is provided by George and Irene Drews and the Thelma B. and Thomas P. Hart Foundation. Sponsorship provided by Goldcorp, USA. Supporting sponsorship by Earl and Wanda Casazza, Casazza SLV, LLC, and Catherine and John Farahi/Atlantis Casino Resort Spa.
His Excellency Francois Delattre, Ambassador of France to the United States of America, is Honorary Patron of the exhibition.