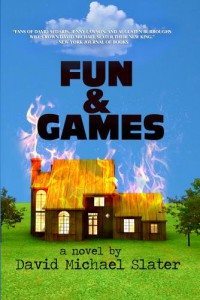 About Fun & Games: The 1980s: it’s the time of Dungeons & Dragons, banana clips and Atari. Jonathan Schwartz is growing up in a family like no other. His sisters–Nadia, the dark genius, and Olivia, the gorgeous tease and temptress–manipulate Jon and his friends for their own entertainment. And his Holocaust survivor grandparents? Their coping techniques are beyond embarrassing. A disastrous visit to Jon’s class by his grandmother unhinges his famous father, setting off a chain of events that threatens to send the dysfunctional Schwartz clan up in flames once and for all. Fun & Games is a heartbreaking and hilarious story of faith, family secrets, betrayal and loss—but it’s also a tale of friendship, love and side-splitting shenanigans.

About the Author: David Michael Slater is an author of books for children, teens, and adults. The Book of Nonsense and The Book of Knowledge Volumes I & II in his on-going six-part teen series, Sacred Books, are being developed for film by Producer Kevin Bannerman (Lion King) and screenwriter Karen Janszen (Dolphin Tale). His 16 picture books include Cheese Louise; Jacques & Spock (a Children’s Book-of-the-Month Alternative Selection); Flour Girl (a 2008 Mom’s Choice Award winner); and The Bored Book, which was reviewed positively in the New York Times.