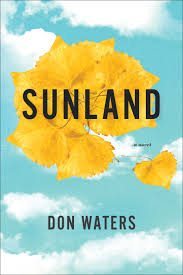 About Sunland: Sid Dulaney, in his mid-thirties, between jobs and short on family and funds, has moved back to Tucson to take care of his beloved grandmother. To hold down the cost of her prescriptions, he reluctantly starts smuggling medications over the border. His picaresque misadventures involve the lovable eccentrics at her retirement village, Mexican gang threats, a voluptuous former babysitter, midnight voicemails from his exasperated ex-girlfriend and, perplexingly, a giraffe. This first novel by the winner of the Iowa Short Fiction Award proves Waters is an important new voice in American fiction. A big, rollicking, character-filled novel, Sunland is an entertaining and humane view at life on the margins in America today.

Praise: “With this beautiful and rambunctious novel, Don Waters shows he’s in the top rank of the new generation of American writers. Sunland takes us on a wild ride across all kinds of borders, yinning and yanging between Mexico and the USA, youth and age, faith and betrayal, legal and outlaw, sober and stoned, and last but by no means least, love and the Void. The writing is gorgeous, the characters ring true on every page, and the story hurtles along with many a hairpin twist and turn. Fasten your seatbelt when you open this book, and hang on.”
— Ben Fountain, author of Billy Lynn’s Long Halftime Walk

About the Author: Don Waters won the Iowa Short Fiction Award for his story collection, Desert Gothic. His fiction has been anthologized in the Pushcart Prize, Best of the West and New Stories from the Southwest. His journalism has appeared in The New York Times, the San Francisco Chronicle and Outside. Born and raised in Reno, he currently lives in Portland. Sunland is his first novel.