By ThisIsReno Published: October 19, 2013Last Updated on April 11, 2019
Reno Bike Project is one of the local businesses that make up Fourth Street in Reno. / Photo by Cambria Roth 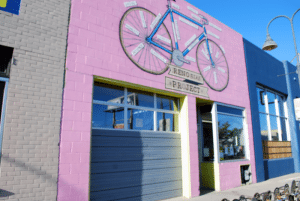 Reno Bike Project is one of the local businesses that make up Fourth Street in Reno. / Photo by Cambria Roth

Reno Councilwoman Neoma Jardon was driving up Fourth Street in her city when she stopped at a four-way light near the National Bowling Stadium. She looked at all four corners of the intersection and saw a homeless population on each. She thought, “How does that look to our visitors who are here for the USBC Women’s Championships?”

Jardon wasn’t being insensitive, but rather pragmatic when she asked herself the question.

“I wanted to figure out how we balance helping the homeless, but also helping the businesses in that area who have invested money and are trying to turn this economy around,” Jardon said.

Her concerns seemed to echo those of others in the community who she spoke with during campaign season. She has seen these conversations continue to grow while more people want to know, “What are we doing about the image of Reno?”

This led to Jardon’s proposal for a committee on homelessness in the Reno City Council. She hopes the committee will produce ideas for how to address issues the homeless and local businesses face.

“There is no doubt that there is a significant need for people relevant to the downturn in the economy, those with mental illness issues, and substance abuse issues,” Jardon said. “It is finding out how to best serve those needs, but at the same time preventing negative impacts on the surrounding businesses.”

Jardon said that Fourth Street became a poverty-stricken area because St. Vincent’s Transitional Center was moved away from Virginia Street in an effort to minimize homeless population around the downtown corridor. The city government thought it was serving a double need by reducing the homeless population in that area, but also putting their services in one place.

“I wasn’t in office at that time, but I understand that they were combining St. Vincent’s with other counseling, clothing and food services on Fourth Street because if the homeless don’t have a home then they likely don’t have a car,” Jardon said.

With the additions of businesses on Fourth Street like Under the Rose Brewing Company, and cultural facilities like Reno Bike Project, a Midtown-like movement could be developing. However, Jardon said there are issues that come with a large homeless population in the area.

“The businesses have a very valid concern with loitering, defecation around the buildings and other activities that are not conducive to running a business,” Jardon said.

Jardon intends for the new committee to help combat these issues, and that the community will help produce ideas to find a balance. While the committee is in its early stages, potential committee constituents could be members of Volunteers of America, Reno Police Department, East Fourth Street merchants, Regional Alliance of Downtown, and clients of the Community Assistance Center.

“Our community comes up with far better ideas than I think anyone sitting in the city government probably could,” Jardon said. “Will we every completely eradicate the homeless situation here or anywhere? No. But how do we meet the needs of those in need and reduce harmful effects on businesses who are employing people and servicing the community.”