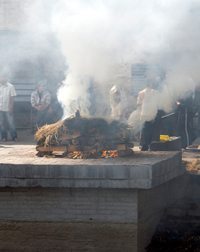 When Rajan Chakrabarty, Ph.D., an assistant research professor at the Desert Research Institute, began looking into the regional inventories of human-produced sources of carbon aerosol pollution in South Asia, considered to be a climate change hot spot, he knew something was missing.

“Current emission inventories do not account for cultural burning practices in Asia as aerosol sources,” said Chakrabarty, who is originally from the Northeastern region of India.

Teaming up with Shamsh Pervez, Ph.D., a professor of Chemistry at the Pandit Ravishankar Shukla University, India and a 2011 Fulbright fellow to DRI, Chakrabarty designed and executed a comprehensive study to investigate the nature and impact of pollutant particles emitted from the widely-prevalent cultural practice of open-air funeral pyre burning in India and Nepal.

In September, Chakrabarty and his colleagues published their first findings in Environmental Science and Technology Letters – an international journal which publishes results of exceptional timeliness and high impact in all areas of environmental science.

Open-air burning of funeral pyres is an age-old and deep-rooted custom in South Asia. More than seven million pyres, each weighing around 550 kilograms, are burned every year throughout India and Nepal. In total, these pyres consume an estimated 50 to 60 million trees annually.

Chakrabarty and colleagues found to their surprise that funeral pyre emissions contain sunlight-absorbing organic carbon aerosols known as brown carbon. In the past, numerous studies have identified black carbon aerosols emitted from combustion of fossil fuels and residential biofuels as the dominant light-absorbing aerosol over South Asia. The researchers estimate the mean light-absorbing organic aerosol mass emitted from funeral pyres to be equivalent of approximately 23 percent of the total carbonaceous aerosol mass produced by anthropogenic burning of fossil fuels, and 10 percent of biofuels in the region.

Although funeral pyres make a small contribution to carbon aerosol pollution on a global scale, the study provides the most thorough analysis yet of their emissions, commented Mark Z. Jacobson, an atmospheric scientist at Stanford University, in a recent article in Chemical and Engineering News. Jacobson said it also highlights the regional impact of brown carbon, which is not included as a heating component in most climate models.

“Our findings underscore the importance of quantifying and characterizing region-specific, cultural combustion activities to enhance existing aerosol emission budgets and climate models,” Chakrabarty said. “The next step will be to work on quantifying the impact of pollutants emitted from the daily burning of biotic materials, such as incense, in over two million Hindu temples in India and Nepal.”

The study also recommends that from a mitigation standpoint, because funeral pyres are deeply entrenched cultural practices, replacing wooden pyres with alternative and ecofriendly practices seems to be the only viable option for controlling emissions.

Read the article from Chemical and Engineering News here – http://cen.acs.org/articles/91/web/2013/10/Funeral-Pyres-Release-Atmosphere-Warming.html