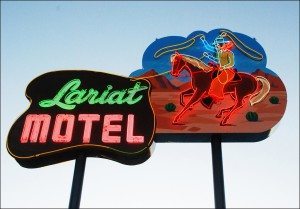 FALLON — Join Fallon Mayor Ken Tedford in kicking-off Nevada’s 150th birthday celebration with the official lighting of the historic Lariat Motel sign from 5 – 7 p.m. Thursday, Oct. 31. The fully-restored sign, donated to the Churchill Arts Council (CAC) by Ray and Dee Dee Ferguson in 2005, is being re-lit as a commemorative piece of Nevada history to usher in the state’s and Fallon’s year-long sesquicentennial celebrations. The Churchill Arts Council invites the community to watch Mayor Tedford flip the switch on Fallon’s iconic neon sign at 6 p.m.

As one of the early Fallon motels, the Lariat erected its neon sign in the early 1950s. The sign represents Nevada’s long history with Americana featuring a cowboy on horseback roping the motel logo. The cowboy can be perceived as roping Fallon into a time of modern technology, bringing the agricultural town into the light as Nevada began to make its mark on the United States in the mid-20th century.

“It is culturally significant to recognize the importance of this sign in Nevada’s history by restoring it,” said Valerie Serpa, the non-profit organization’s executive director. “This is a very well-known and fondly remembered piece of historical artwork from a turning point in the state’s history, when Nevada truly began to experience growth in its rural communities as well as in Reno and Las Vegas. We are thrilled to celebrate the re-lighting of this sign in honor of the State’s 150th birthday.”

Funding for restoration of the sign was provided by the Nevada Commission on Tourism, with additional support from the City of Fallon, Don Sefton/Systems Consultants, Young Electric Sign Company (YESCO), Mike Ryle/Dreambuilders Construction and Grant Mills/Mills Farm & Industrial.

The City of Fallon’s kick-off to the Nevada 150 celebration begins at 5 p.m. Oct. 31 in the Lariat Courtyard at the Oats Park Art Center, 151 E. Park St., where the Mayor flips the switch, bringing the celebrated sign back to life. The lighting of the Lariat sign is also one of the first Nevada 150 Commission events of the year with music by Cliff Van Woert and Scott Payne. Refreshments are provided.