Downtown to get new parking meters

By ThisIsReno October 23, 2013
Out of service parking kiosk in downtown Reno. 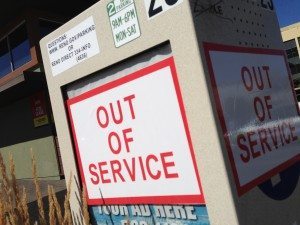 Out of service parking kiosk in downtown Reno.

The Reno City Council today approved a settlement agreement for previous downtown parking kiosk systems and awarded the city’s parking management system to IPS Group, Inc. UPDATE: The settlement amount is at the end of the article.

According to the City, “in July 2013, a Request for Proposal for a parking management system was released. Six responses were received and evaluated and ranked based on price, reliability, convenience, and experience. The top two proposers from the initial evaluation were allowed the opportunity to install two of their meters with sensors for evaluation and data gathering for at least one week prior to giving an oral presentation and demonstration of the features that they had proposed.”

The Reno City Council will finalize an agreement at a December meeting. Once a contract is approved, the new parking management system is expected to be operating in February 2014.

SETTLEMENT AGREEMENT AND MUTUAL RELEASE
Curb System, LLC (“Curb”), a Nevada limited liability company, and the City of Reno (the “City”) settle all known and unknown claims against one another and mutually release each other as follows:
1. Curb releases all claims against the City;
2. The City releases all claims against Curb;
3. Curb will pay TICO $6,500.00 (from the interplead funds) to have TICO, as soon as feasibly possible, remove, patch and store for thirty (30) days all kiosks installed on City property;
4. $5,000.00 from the interplead funds will be paid to Judge E. Michael Fondi (Ret.);
5. Curb will pay from the interplead funds $7,250.00 for charges from the City to Curb for installation of parking meters;
6. Curb will receive $7,250.00 from the interplead funds for payment of fees, costs, and related expenses;
7. Judge Michael E. Fondi (Ret.) shall have continuing jurisdiction over the interpretation and enforcement of this Agreement;
8. This is subject to City Councilor City Manager approval. The undersigned Deputy City Attorneys do hereby agree to recommend to the City Council and/or City Manager that this be approved.